ANSA
An aerial photo from the past shows an overcrowded boat off the coast of Malta.
8 May 2012

At least seven people are reported to have died recently while sailing from Libya to Malta, bringing the number of reported or confirmed dead among people attempting to reach Europe from the North African nation to 81 this year, the United Nations refugee agency said today.

Exhausted survivors from a boat carrying Somali refugees that landed on one of Malta’s most popular beaches this weekend told the Office of the UN High Commissioner for Refugees (UNHCR) that five men and two women aboard perished during the voyage from Libya.

The boat came ashore at Riviera Bay on Saturday carrying 90 people, and the emergency services were alerted by families spending the evening at the beach.

“This is the fourth such boat to have arrived in Malta this year, bringing a total of some 210 people,” a UNHCR spokesperson, Adrian Edwards, told a news conference in Geneva. “A further 45 boats have arrived in Italy.”

According to the agency’s regional office in Italy, the latest deaths bring the number of reported or confirmed dead among people attempting to reach Europe from Libya to 81 this year – or two people every three days, on average.

Mr. Edwards noted that, compared to last year, which saw tens of thousands of people travelling from Tunisia and Libya, the number of arrivals in Malta and Italy from North Africa is down, with around 2,200 people having arrived in 2012, mostly in Italy.

“UNHCR reiterates its call to ship masters in the Mediterranean for heightened vigilance and continued adherence to the longstanding maritime obligation of aiding those in distress,” he added. 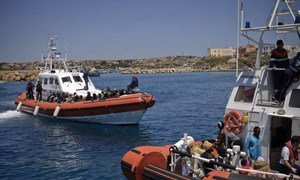 The Mediterranean Sea has become the deadliest stretch of water in the world for migrants and refugees, the United Nations High Commissioner for Refugees (UNHCR) reported today.