UN Photo/Eskinder Debebe
Head of the UN peacebuilding office in Guinea-Bissau Joseph Mutaboba (right), briefs the Security Council on the situation in that country.

7 May 2012
The current political crisis in Guinea-Bissau is worsening the living conditions of its citizens, a United Nations envoy said today, stressing that an inclusive sustainable solution among all national stakeholders is needed to put an end to the turmoil.

“As negotiations towards finding a solution to crisis continue, the needs of the population of Guinea-Bissau are set aside,” the Secretary-General’s Special Representative in the West African country, Joseph Mutaboba, told a Security Council meeting. “As a result of the political crisis, the payment of civil servants’ salaries has been delayed, in the absence of a Government, and the cashew trading season, crucial to the economy and livelihood of the population, has been disrupted.”

Mr. Mutaboba, who was presenting the latest report of Secretary-General Ban Ki-moon on the situation in the country, underscored that the continued delay in the return to normalcy is negatively impacting innocent citizens who want to see a speedy resolution to the crisis and noted that the Council should consider acting to stop those who hinder the dialogue process.

“The Council may wish to consider the imposition of targeted measures against those continuing to impede the return to constitutional order in the country,” he said.

According to assessments conducted by the UN World Food Programme (WFP), the impact of the situation in households in the regions of Oio, Quinara, Gabu, Bafata and Cacheu, has indicated that cashew nuts are being traded at a lower price than the agreed, seriously affecting the revenue of the population which relies on this main export product to earn a living.

Mr. Mutaboba also emphasized that a sustainable solution must be one that is inclusive of all national stakeholders, given the divisions between political and military groupings in Guinea-Bissau, and reiterated that he will continue to work with national actors to foster dialogue among various segments of society aimed at arriving at a consensual solution.

In addition, the envoy highlighted the importance of the mediation process led by the Economic Community of West African States, and called on the international community to unite in its engagement with Guinea-Bissau.

In her remarks to the same Council meeting, the Chair of the Guinea-Bissau Configuration of the Peacebuilding Commission, Ambassador Maria Luiza Ribeiro Viotti of Brazil, called for the release of all those illegally detained, and emphasized the importance of restoring constitutional order.

“The first step to further national reconciliation in Guinea-Bissau should be the respect of the rule of law and the restoration of constitutional order,” Ms. Ribeiro said, reiterating the Peacebuilding Commission’s commitment to help the country implement the necessary reforms to achieve political stability and further its social and economic development.

Killers of Somali journalist must be brought to justice – UNESCO chief 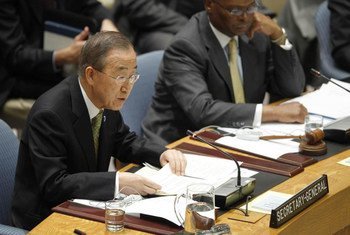 3 May 2012
Secretary-General Ban Ki-moon expressed deep concern that despite the international community’s calls for the restoration of civilian rule in Guinea-Bissau, the military junta there remains in power while the country’s security and socio-economic situation deteriorates.