The state of Jonglei in South Sudan has the opportunity to start “a new chapter of peace,” a United Nations envoy said over the weekend, during the signing of resolutions to end violence among the state’s six main communities.

“Today is the opportunity to say ‘No’ to violence,” said the Special Representative of the Secretary-General to South Sudan, Hilde F. Johnson, in her remarks at the closing ceremony of The Jonglei All Community Peace Conference in Bor, Jonglei’s capital, on Saturday. “We need to see peace reach the communities, the grassroots and the cattle camps.”

Clashes between various communities in the state – which have a history of inter-communal feuds resulting from cattle rustling – have affected some 120,000 people since December.

Ms. Johnson stressed that lasting peace can only happen when comprehensive solutions to the challenges of Jonglei have been found, when security institutions are being established, and protection for the people is in place.

The chiefs of the six communities involved – Dinka, Kachipo, Jie, Nuer, Anyuak and Murle – expressed their commitment to complete the ongoing civilian disarmament, and their appreciation for the responsible conduct of the Sudanese People’s Liberation Army during the campaign.

In her remarks, Ms. Johnson, who also heads the peacekeeping operation known as the UN Mission in South Sudan (UNMISS), noted the importance of peaceful disarmament for ending the cycle of violence in the state and expressed hope that “the process would be completed the way it had begun.”

Ms. Johnson commended the decisions by the communities and reassured them of UNMISS’ support saying, noting that the United Nations is “committed to help you open a new chapter in Jonglei, a chapter for sustainable peace.”

Some 3,000 people attended the signing ceremony, which took place in Bor’s Freedom Square and which was attended by President Salva Kiir and other state officials. 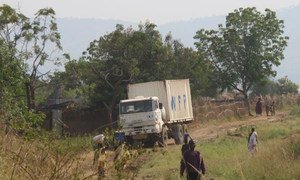 The United Nations relief chief today visited areas in South Sudan hit by recent ethnic violence and met some of the victims of a vicious cycle of raids and reprisal attacks, describing what she had seen as “a terrible situation” with people having lost loved ones, property and livelihood.