Speaking from Niger, a top United Nations official on Sunday appealed to the international community to provide the resources needed to help millions in crisis in the Sahel region of West Africa, warning that the situation is critical and there is no time to lose.

“This is one that the international community cannot and must not ignore,” said the Executive Director of the World Food Programme (WFP), Ertharin Cousin, in a telephone interview from Niger's capital, Niamey.

Accompanied by the UN High Commissioner for Refugees António Guterres, Ms. Cousin is in Niger to raise awareness of the crisis and mobilize support for emergency assistance to the people affected in the country and in neighbouring Mali.

There are currently 15 million people facing food insecurity in the Sahel, which stretches from the Atlantic Ocean to the Red Sea, and includes countries such as Niger and Mali. The trip is Ms. Cousin's first field visit since assuming the leadership of WFP one month ago.

She stressed that the situation is critical following the recent drought which has brought hunger for the third time in recent years.

“Niger is again facing a crisis of a failed harvest because last season the rains did not come. A failed harvest is always a food security crisis,” Ms. Cousin said. “Because the rains failed last season, what you're seeing is that the hungry poor, the most vulnerable populations, are now at the point where they have depleted their assets. And as a result, they have no food.”

In Niger, WFP has launched an emergency operation to support 3.3 million people, with a special focus on children under two. Some 35 per cent of people being assisted will receive cash. Over 423,000 people have already received support through food-for-assets and cash-for-work programmes.

As part of their three-day visist, the two UN senior officials are meeting with some of the thousands who have fled fighting in neighbouring Mali. The refugees have put a further strain on communities in Niger that are already facing a food crisis.

“In this case, the crisis is different than it's ever been in the past,” said Ms. Cousin. “It's even more complicated because of the evolving conflict situation in Mali as well as the high food prices.”

WFP estimates it needs some $450 million to help people across the region. “We have about three to four weeks for the international community to invest in WFP and other UN partner organizations working in the Sahel,” the food agency chief said.

Last month, Secretary-General Ban Ki-moon called on the global community to act quickly to address what he described as a “cascading crisis” sweeping the Sahel.

“The statistics are sobering: 15 million people are directly affected. More than 200,000 children died of malnutrition last year – and another one million are threatened right now,” he had said in an address to the Luxembourg Parliament.

♦ Receive daily updates directly in your inbox - Subscribe here to a topic.
♦ Download the UN News app for your iOS or Android devices.
sahel|niger 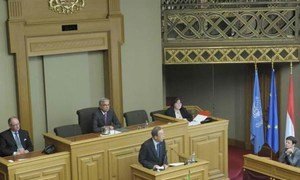 Secretary-General Ban Ki-moon today called on the global community to act quickly to address what he described as a “cascading crisis” sweeping the Sahel region of West Africa, where 15 million people have been affected by the drought and conflict-related crisis in the area.