4 May 2012
Sustainable water reforms are having a positive impact on countries’ development, according to the results of a United Nations survey released today.

The survey reveals that countries that have implemented water reforms backed by Member States at the UN Earth Summit held in Rio de Janeiro, Brazil, 20 years ago have had significant improvements to drinking water access, human health and water efficiency in agriculture.

“[The survey] shows important successes regarding integrated water resources management, where a more sustainable approach to water has resulted in tangible benefits for communities and the environment,” said the Executive Director of the UN Environment Programme (UNEP), Achim Steiner.

More than 130 governments participated in the survey, which focused on progress towards implementing internationally-agreed approaches to the management and use of water, known as Integrated Water Resources Management (IWRM), which was backed by countries in Rio.

The survey, which was coordinated by UNEP on behalf of the UN inter-agency coordination mechanism for freshwater issues (UN-Water), asked governments for their feedback on governance, infrastructure, financing and other areas relating to water management, to gauge how successful countries have been in moving towards IWRM.

Overall, 90 per cent of countries surveyed reported a range of positive impacts from integrated approaches to water management following national reforms. However, the report showed that global progress has been slow in the areas of irrigation, rainwater harvesting and investment in freshwater ecosystems.

The report provides examples of countries that have shown progress since implementing water management measures. In Estonia, for example, the introduction of water charges and pollution taxes contributed to improved water efficiency and a reduction of pollution in the Baltic Sea.

In Costa Rica 50 per cent of revenues gained from water charges are now re-invested in water resource management, and in Ghana, 40 per cent of irrigation schemes for more effective water use and productivity have been rehabilitated.

Mr. Steiner emphasized the importance of these findings to build on water management initiatives at the UN Conference on Sustainable Development (Rio+20) in Brazil next month. The survey includes recommendations and suggested targets designed to inform policymakers at the conference.

“At Rio+20, governments will have the opportunity to build on these innovations and chart the way forward for sustainable development, where the water needs of a global population set to rise to nine billion by 2050 can be met in an equitable way,” he said. 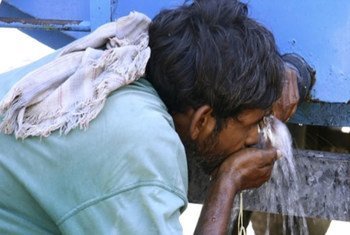 6 October 2011
Successful water projects can serve as templates around the world and help to stimulate the adoption of green economies, a conference run by the United Nations inter-agency group focused on water issues has heard.