The United Nations today voiced concern over Venezuela’s announcement that it is establishing a committee to evaluate the possibility of withdrawing from the Inter-American Commission on Human Rights (IACHR).

“The IACHR, which is more than 50 years old and is a highly respected body, has in particular had a very positive impact in the region, and it has been crucial in obtaining justice for large numbers of victims of human rights violations, particularly during the period when dictatorships ruled many countries in the region,” he said.

During a press briefing in Geneva, Mr. Colville noted the longstanding relationship between the Office of the High Commissioner (OHCHR) and the IACHR in areas such as citizen security, juvenile justice, torture prevention and prison conditions, as well as the collaboration between the UN Human Rights Council and IACHR experts on issues relating to freedom of expression, torture and indigenous rights, among others.

“We would like to encourage the Venezuelan Government, and all other States in the Americas, to continue to cooperate with regional and international human rights mechanisms, and urge them not to take any measures that would weaken human rights protection – not just in Venezuela but also with potentially negative ramifications for people all across the continent,” Mr. Colville said.

The IACHR is an organ of the Organization of American States (OAS) whose mission is to promote and protect human rights in the Americas. The Commission, which was created in 1959, has its headquarters in Washington, D.C. 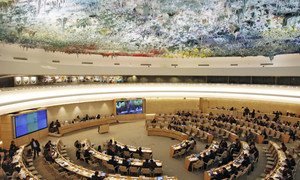 Three independent United Nations human rights experts today expressed their alarm at the decision of Venezuelan authorities to extend the house arrest of a judge for another two years, saying it was concerned about her physical and mental health.