Secretary-General Ban Ki-moon expressed deep concern that despite the international community’s calls for the restoration of civilian rule in Guinea-Bissau, the military junta there remains in power while the country’s security and socio-economic situation deteriorates.

“The collective hope of the international community is to see the country’s swift return to constitutional normalcy and the continuation of critical reform programmes,” Mr. Ban said, in his latest special report to the Security Council on the situation in the African country.

Mr. Ban stressed the importance of the engagement of the African Union, the Economic Community of West African States (ECOWAS) and the Community of Portuguese-speaking Countries (known by the Portuguese acronym CPLP) to address the crisis, and called on all national stakeholders to commit themselves to the ECOWAS-led mediation process at finding a sustainable solution.

“I encourage Guinea-Bissau’s international partners to remain committed to a long-term engagement in the country to support the people of Guinea-Bissau in addressing the medium to long-term goal of resolving the underlying causes of the current crisis,” Mr. Ban said. “I also urge the immediate implementation of security sector reform.”

In addition, the UN chief emphasized that the issue of drug-trafficking needs to be urgently addressed as both the political and military leadership have accused each other of being involved in the illegal narcotics trade, and efforts to combat this problem “could go a long way in addressing impunity in Guinea-Bissau.”

Mr. Ban called on Member States to reinforce their commitment and efforts to fight drug-trafficking at the production, transit and consumption stages, and underlined that regional institutions such as ECOWAS can complement national initiatives.

In the report, the Secretary-General underscored that any lasting solution to instability in the country should include actions to fight impunity and ensure that those responsible for political assassinations – including those committed in 2009, when the country’s then-president was killed – are brought to justice. He also reaffirmed the UN’s support including through the UN Integrated Peacebuilding Office for Guinea-Bissau (UNIOGBIS).

♦ Receive daily updates directly in your inbox - Subscribe here to a topic.
♦ Download the UN News app for your iOS or Android devices.
Guinea Bissau 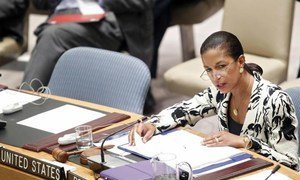 Raising the possibility of targeted sanctions, the United Nations Security Council today demanded the immediate restoration of constitutional order in Guinea-Bissau, as well as the reinstatement of the West African country's legitimate government.