Burundi is making progress in improving it human rights record, but impunity remains a challenge, a senior United Nations official said, stressing that the envisaged establishment of a truth and reconciliation commission will be a real test of country’s commitment to upholding human rights.

“A credible and independent [Truth and Reconciliation] Commission that meets international standards and ensures broad participation and ownership by all segments of the society, with commissioners selected in an open and transparent manner, will help to build people’s trust in mechanisms of transitional justice,” the UN Assistant Secretary-General for Human Rights, Ivan Šimonovic, said in a press release issued at the end of his 30 April-2 May visit to the African country.

The human rights official encouraged the Government of Burundi to implement the recommendations made by various UN human rights mechanisms, and also underlined the importance of establishing a Special Tribunal and adopting a victim-centred approach, with particular attention to the needs of women, children and other vulnerable groups.

During his visit, Mr. Šimonovic met with First Vice President Thérence Sinunguruza, as well as ministers and officials in charge of justice, foreign affairs, human rights, public security and the Interior. He also met with the chair of the Independent National Human Rights Commission, members of the diplomatic community and representatives of civil society.

There has been a decline in the number of extra-judicial killings in Burundi so far this year, Mr. Šimonovic noted, calling for greater efforts to guarantee the right to life for all and the bringing to justice perpetrators of such killings, as well as those who commit torture, arbitrary arrests and unlawful detentions. He pointed put that the UN Office in Burundi (BNUB) last year documented 61 cases of extra-judicial killings, but only eight perpetrators been tried and convicted. 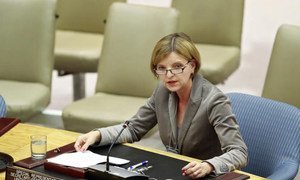