3 May 2012
United Nations top officials today highlighted the power of press freedom to spark social and political change and to hold governments accountable, stressing that this vital right must be ensured across the world by creating the conditions that allow journalists to perform their work safely.

“A free press gives people access to the information they need to make critical decisions about their lives. It holds leaders accountable, exposes corruption, and promotes transparency in decision-making,” Secretary-General Ban Ki-moon said in his message marking World Press Freedom Day, which falls on 3 May each year. “It raises awareness and offers an outlet for different voices, especially those that would otherwise go unheard.”

In particular, Mr. Ban, along with the Director-General of the UN Educational, Scientific and Cultural Organization (UNESCO), Irina Bokova, stressed the crucial role that both new and old forms of media have played over the past year in the Middle East and North African regions which have been at the centre of various civil movements.

The UN General Assembly designated 3 May as World Press Freedom Day in 1993. It aims to celebrate the fundamental principles of press freedom; to evaluate press freedom around the world, to defend the media from attacks on their independence and to pay tribute to journalists who have lost their lives in the exercise of their profession. This year’s theme for World Press Freedom Day is ‘New Voices: Media Freedom Helping to Transform Societies.’

“Change in the Arab world has shown the power of aspirations for rights when combined with new and old media. Newfound media freedom is promising to transform societies through greater transparency and accountability.” Mr. Ban and Ms. Bokova said in a joint statement. “It is opening new ways to communicate and to share information and knowledge. Powerful new voices are rising – especially from young people – where they were silent before.”

The President of the General Assembly, Abdulaziz Al-Nasser, underlined the importance of new technologies in empowering young people to express themselves, and added that governments should support, not censor these mediums.

“Governments that try to suppress or shut-down new media platforms should rather embrace new media for the beneficial transformation of their societies. They need to create and promote a thriving environment for free media and free expression,” Mr. Al-Nasser said in remarks, delivered on his behalf, at an event to mark the Day at UN Headquarters in New York this morning.

According to UNESCO, 62 journalists were killed last year and many more were injured. As of December 2011, 179 journalists were detained, indicating a 20 per cent increase from the previous year, and the highest level since the 1990s.

“These journalists must not be forgotten and these crimes should not remain unpunished,” Mr. Ban and Ms. Bokova said. “As media moves online, more online journalists, including bloggers, are being harassed, attacked, and killed for their work. They must receive the same protection as traditional media workers.”

To mark the Day, UNESCO is organizing a series of events in Tunis, over three days, focussing on the role of media as a vehicle for social change. The events include an award ceremony for the winner of the UNESCO/Guillermo Cano World Press Freedom Prize, which this year will go to Azerbaijani journalist and human rights activist Eynulla Fatullayev.

Ms. Bokova and the Prime Minister of Tunisia, Hamed Jebali, will also open an international conference which will debate issues on contemporary media over the next two days. In addition, a series of side events will be held by UNESCO’s press freedom partners, which include non-governmental and intergovernmental organizations, international media outlets and youth groups.

World Press Freedom Day was also marked elsewhere in the UN system. The UN Assistance Mission in Afghanistan (UNAMA) organized a roundtable discussion in Kabul with senior Afghan journalists and others to discuss press freedom in Afghanistan. Similar discussions were held in Kunduz, Bamyan and Jalalabad – at the latter gathering, the journalists in attendance agreed on a joint document which urges officials to safeguard their safety, as outlined in the Afghan Constitution and international documents. 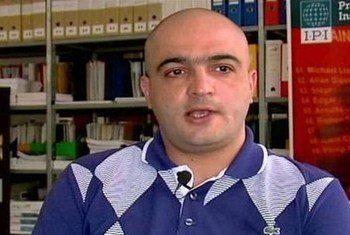 17 April 2012
An Azerbaijani journalist and human rights activist has been named this year’s winner of the annual United Nations prize that honours those promoting freedom of expression.