The head of the United Nations refugee agency today urged the international community to back a new regional strategy aimed at improving conditions for Afghan refugees in neighbouring countries and supporting those who wish to return to their country.

The head of the United Nations refugee agency today urged the international community to back a new regional strategy aimed at improving conditions for Afghan refugees in neighbouring countries and supporting those who wish to return to their country.

The new “solutions strategy,” developed jointly by Iran, Pakistan, Afghanistan and the Office of the UN High Commissioner for Refugees (UNHCR), was unveiled at the opening of a two-day conference in Geneva to discuss support for the voluntary repatriation of Afghan refugees, sustainable reintegration and assistance for host countries.

“When three countries join in a common vision reflecting unified strategy and political will, it deserves our recognition and support,” the UN High Commissioner for Refugees, António Guterres, said at the conference opening.

“I urge this conference to generate the ideas and means to reflect the international community’s solidarity with the Afghan refugees and the hosting communities that share their resources with them,” he added.

Afghan refugees constitute the largest and longest-standing refugee situation in UNHCR’s history. Despite the return of some 5.7 million Afghans to their homeland since 2002, there are still an estimated two million Afghans in Pakistan and close to one million in Iran. In recent years, return rates have slowed down, with an estimated 70,000 refugees going back to Afghanistan last year.

The “solutions strategy” contains a package of measures aimed at supporting refugees, and tailored towards the specific needs of each of the three countries hosting them. Implementation of the strategy will cost an estimated $1.9 billion and support from donors will be crucial for its success.

In Afghanistan, the focus is on supporting reintegration. Some 49 pilot sites in 19 high-return provinces have been identified for support with shelter, social services, employment and food security.

In Iran, the priority is on supporting returns to Afghanistan, as well as helping to ensure that their returns are sustainable. Programmes include vocational training for refugees, but support is also envisaged for a health insurance scheme. For the refugees in Pakistan, the emphasis is on the voluntary repatriation and support for host communities.

“We are in an important period of transition in Afghanistan that is characterized by uncertainty,” said Mr. Guterres. “Afghan refugees have shown that they vote with their feet when conditions for return are conducive … We have a collective responsibility to support and facilitate their legitimate aspirations.” 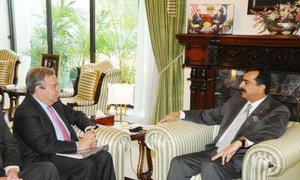 The United Nations refugee chief today thanked the Pakistani Government for its generosity towards Afghans who have sought refuge in the country, while also calling for creating the right conditions in Afghanistan that will promote large-scale voluntary returns.