2 May 2012
Expanding Africa’s shift towards organic farming will have beneficial effects on the continent’s nutritional needs, the environment, farmers’ incomes, markets and employment, the deputy head of the United Nations trade and development body said today.

“Organic agriculture can offer an impressive array of food security, economic, environmental, and health benefits for developing countries, including in Africa,” said the Deputy Secretary-General of the UN Conference on Trade and Development (UNCTAD), Petko Draganov, during the opening of the 2nd African Organic Conference in the Zambian capital, Lusaka.

Mr. Draganov said UNCTAD, which is tasked with promoting the integration of developing countries into the global economy, strongly supports the growing use of organic farming practices in Africa – the region has more certified organic farms than any other continent – and pointed out that organic agriculture was a central topic of UNCTAD’s recent quadrennial conference in Doha, Qatar.

“The conference emphasized the importance of food security, sustainable agriculture, and a transition towards a ‘green’ economy,” Mr. Draganov said. “Clearly the subject of this meeting – organic agriculture – can have an important role in achieving sustainable and inclusive development.”

Among the objectives of the three-day conference in Lusaka is the development of an African Organic Action Plan intended to spur expansion of the organic farming sector, streamline certification and ‘organic equivalency’ systems for vigorous trade in organic goods, and add to the continent’s markets for organic produce.

Organic agriculture avoids the use of artificial fertilizers and other chemicals, which are expensive for the continent’s farmers because 90 per cent of them are imported. It also preserves and enhances the soil in a region where land degradation and expanding deserts are a serious concern. The farming method relies primarily on locally available renewable resources, shielding farmers from price shocks associated with external farming inputs.

According to UNCTAD, organic agriculture can increases farm yields by 100 per cent or more and help farmers receive higher prices for their produce, which sells at a premium. The method also helps create jobs in rural areas.

The conference in Lusaka is jointly organized by UNCTAD, the African Union, the International Federation of Organic Agriculture Movements, the UN Food and Agriculture Organization (FAO), the Zambian Ministry of Agriculture and Livestock, the Organic Producers and Processors Association of Zambia and Grow Organic Africa. 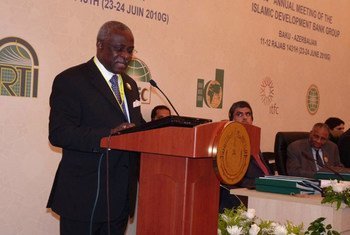 26 March 2012
With the deadline for achieving the Millennium Development Goals (MDGs) just three years away, a senior United Nations official today emphasized that spending on agriculture is the most effective type of investment for halting poverty in Africa.