1 May 2012
The head of United Nations peacekeeping operations today called on all parties in Syria to ensure the cessation of violence is observed, stressing that recent reports from observers on the ground show that much more needs to be done to maintain a ceasefire in the country.

“It is clearly for the parties to demonstrate the desire to cease all forms of armed violence,” said Under-Secretary-General Hervé Ladsous at a press briefing in New York. “More bombs, more weapons, more violence could only increase the tension and add to an already very considerable toll of human lives.”

A truce was agreed on 12 April between the Syrian Government and opposition parties. A week later, the Security Council authorized the establishment of UNSMIS, an observer mission made up of up to 300 unarmed military observers and deployed for an initial period of 90 days, to monitor the cessation of violence in Syria.

UNSMIS has two mandated tasks: to monitor the cessation of armed of armed violence in all its forms and to monitor and support the implementation of the six-point proposal of the Joint Special Envoy of the UN and the League of Arab States, Kofi Annan.

Mr. Ladsous told reporters that Major-General Robert Mood, who was appointed by Secretary-General Ban Ki-moon last week to head UNSMIS, had arrived in Damascus on Sunday and expressed his aim of reaching out to Syrians and to ensure that all forms of violence stop immediately.

“The mission is still in its early days and we are making every effort to get the observers on the ground and operational as quickly as possible,” Mr. Ladsous said, adding that even though the number of observers is small at the moment, they are already having a visible impact on the five locations they are staying in: Damascus, Homs, Hama, Dara’a and Idlib.

“Their presence has the potential to change the political dynamic,” he added. “They help build calm, and calm helps the political process that Mr. Annan is leading and that process in turn, we hope, will bring lasting peace to a democratic Syria.”

The peacekeeping chief also said he expected the number of UNSMIS observers to increase rapidly over the next few weeks so that the mission can build up to full operational strength by the end of May.

UN envoy urges protection of children from violence in Syria 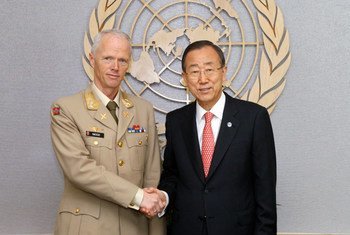