1 May 2012
Secretary-General Ban Ki-moon today hailed Daw Aung San Suu Kyi as a symbol of hope for human rights worldwide as he met the Nobel laureate and pro-democracy leader for the first time at her home in Yangon, Myanmar.

“She is really a strong and dedicated leader of this country for democracy and development and human rights for all,” Mr. Ban said in a joint press encounter with Ms. Suu Kyi, who was released from nearly two decades of house arrest in November 2010.

“I, like everybody in the world, fully admire her leadership and commitment, during the last two or three decades for peace and development and human rights for this country, for this region, and for the world. She has been a symbol of our hope for human rights for all, all around the world,” he added.

During their meeting, Mr. Ban invited Ms. Suu Kyi to visit United Nations Headquarters in New York. Their meeting capped off a three-day visit to Myanmar by the Secretary-General – his third since assuming his post.

The UN chief congratulated Ms. Suu Kyi on her recent election, and commended her decision yesterday to take the oath and become a parliamentarian. “I am sure that she will play a very constructive and active role as a parliamentarian for the betterment and well-being of this great country,” he noted.

During his visit, Mr. Ban also met with a number of senior government officials, including President Sein. Yesterday, he also addressed Myanmar's parliament – the first time ever by an outside guest – and outlined a four-point agenda for action to advance the country's national reconciliation and the democratic transition.

“The Myanmar people and Government have embarked on a path of reform, democratization, and fuller participatory democracy,” said Mr. Ban. “They deserve our support. They deserve the support of the whole international community. The United Nations will continue to stand by the people in every step and in any way we can. This is my pledge.”

While in Yangon today, the Secretary-General also launched the UN Global Compact’s Myanmar network. Set up in 2000, the initiative has some 7,000 companies in 140 countries, which have pledged to align their business practices to ten universally accepted principles concerning human rights, labour, environmental sustainability and the fight against corruption.

“I hope that Myanmar’s local business entrepreneurs will have the opportunity to fully utilize and interact with international business leaders to widen and deepen their business opportunities for direct foreign investment, as well as job creation,” Mr. Ban said.

“Through this interaction, they can strengthen their capacity in terms of good business management and accountability and transparency and even human rights,” he added. “I hope that this will be a good opportunity for them to mutually benefit for economic development.”

Speaking at the launch, which brought together a number of domestic and international companies in Myanmar, the Secretary-General noted that it was a “remarkable” time for the country.

“We are here at a time of transition – a time that is ripe with potential and expectation for business and investment. Atop the list of priorities are jobs and income opportunities, especially for the many young people whose talents and creativity are waiting to be tapped,” he said.

“Equally paramount is development that is widespread and sustainable,” he stated, adding that, to deliver prosperity and opportunity widely, Myanmar needs strong and inclusive markets. “Business has to be the backbone of growth. However, investment and business activity must be sustainable and responsible – upholding the highest standard of business ethics.”

At a press conference before departing Myanmar, the Secretary-General said he was leaving with “profound hope and expectation” in the future of the country.

“From every front – at every level, I heard a genuine commitment for democracy, political reform and reconciliation,” he said. “The leaders of this country have a shared determination to write a new chapter for Myanmar. The international community has a shared responsibility to help Myanmar and her people.”

At the same time, the UN chief added that process of opening up is still “uncertain and fragile,” and will contain obstacles and bumps along the road. “We need to remain clear-sighted – and do all we can to keep up the momentum for lasting change,” he said. 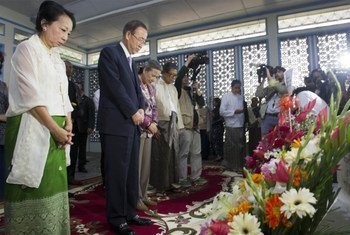 30 April 2012
During a historic address to Myanmar’s parliament, Secretary-General Ban Ki-moon today emphasized the importance of partnerships – amongst the country’s political leadership as well as with the international community – in helping the Asian country advance its process of national reconciliation and democratic transition.