UN Photo/M. Garten
Ban Ki-moon and wife Yoo Soon-taek, along relatives of former UN Secretary-General U Thant, pay their respects at his memorial in Yangon.
30 April 2012

During a historic address to Myanmar’s parliament, Secretary-General Ban Ki-moon today emphasized the importance of partnerships – amongst the country’s political leadership as well as with the international community – in helping the Asian country advance its process of national reconciliation and democratic transition.

“The dramatic changes sweeping Myanmar have inspired the world, and we know that your ambitions for the future reach higher still,” Mr. Ban said in his remarks to the members of Myanmar’s Union Assembly, during an extraordinary session of the parliament. “We know that Myanmar can meet the challenges of reconciliation, democracy and development, but it will take your full determination and your common leadership and partnership.”

Earlier this month, Myanmar citizens headed to the polls to vote for representatives of 48 parliamentary seats, with pro-democracy leader Aung San Suu Kyi winning a position in the lower house of parliament. The by-elections were part of a series of democratic reforms led by President Thein Sein, which began last year.

Addressing the press before leaving UN Headquarters in New York, the Secretary-General had said that there have been “encouraging” political and economic reforms over the past year-and-a-half in the South-east Asian nation, including the recent elections and important steps toward reconciliation. The visit, at the invitation of President Sein and the third for Mr. Ban since he became Secretary-General in 1997, will include a meeting with Ms. Suu Kyi – the UN chief had said he was looking forward to personally congratulating both individuals.

“Elections and open government are the keystones of democracy, but they must be matched with a healthy and vibrant political climate,” Mr. Ban emphasized, adding that leaders must look beyond politics and work for the long-term interests of the country as well as for the diverse segments of society including women, young people, the rural poor, and ethnic and religious communities.

In his speech to the parliament – the first ever by an outside guest – the UN chief also outlined a four-point agenda for action to advance national reconciliation and the democratic transition at “this historic moment.”

The agenda entails increasing investments in health and education so that the population can quickly see the benefits of the democratic transition in their daily lives, increasing international development assistance, implementing measures to accelerate the reconciliation process such as resettling displaced communities and releasing political prisoners, and fostering an inclusive democratic culture which respects human rights and in particular freedom of speech.

“Priority must be placed on nationally inclusive human rights norms along with the rights of self-expression of ethnic groups,” Mr. Ban said. “This will have to be the essential basis for the emergence of an authentic national democratic unity.”

Mr. Ban also called on the international community to provide assistance to Myanmar to help it develop its natural resources as well as its manufacturing and service industries.

“Today, Myanmar receives a small percentage of per capita development assistance compared to other neighbouring countries,” he said. “The best way for the international community to support reform is to invest in it.”

During his three-day visit to the country, which ends tomorrow, the Secretary-General also announced a new partnership between Myanmar and the UN to support the country’s first population and housing census in thirty years.

“A census is a crucially important undertaking. The vast amount of information it can capture gives policy-makers the information they need for planning and delivering services, in particular to the poorest and most vulnerable,” Mr. Ban said, adding that while there will be a series of challenges to carry out the census, he was confident that these could be overcome with the support of the Government and the international community.

In addition, he noted that UN expertise in various areas, such as rule of law, electoral assistance, anti-corruption and democratic practices, would be made available to Myanmar. “Progress takes partnership,” Mr. Ban said. “The United stands ready to help in every way we can.”

This includes UN support for the democratic and national reconciliation processes as may be required; UN technical assistance for the country’s first census; and greater UN engagement to help the country meet its development priorities. 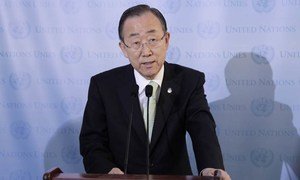 Secretary-General Ban Ki-moon will later this week head to Myanmar, which he said is at a “critical” moment in its transition, preceded by an official visit to India.