Secretary-General Ban Ki-moon today announced the appointment of Major General Robert Mood of Norway as the head of the United Nations Supervision Mission in Syria (UNSMIS).

Mr. Mood has been the Inspector General of Veteran Affairs of the Norwegian Armed Forces since last year, and was previously the head of mission and chief of staff of the UN Truce Supervision Organization (UNTSO).

Born in Norway in 1958, Mr. Mood has extensive experience and knowledge of peacekeeping operations at a national and international level, including in UN operations such as the Organization’s Interim Force in Lebanon (UNIFIL) from 1989 to 1990.

Last Saturday, the Security Council authorized the establishment of UNSMIS, an observer mission made up of up to 300 unarmed military observers and deployed for an initial period of 90 days, to monitor the cessation of violence in Syria.

The observers are also tasked with monitoring and supporting the full implementation of the six-point peace plan put forward by the Joint Special Envoy of the UN and the League of Arab States for Syria, Kofi Annan, which calls for an end to the violence, access for humanitarian agencies to provide relief to those in need, the release of detainees, and the start of inclusive political dialogue that takes into account the aspirations of the Syrian people.

Mr. Ban also appointed Karin Landgren of Sweden as his Special Representative for Liberia, replacing Ellen Margrethe Løj of Denmark. In a statement issued by his spokesperson, Mr. Ban thanked Ms. Løj for “her dedicated service and important contribution to the Liberian peace process over the past four years.”

Born in 1957, Ms. Landgren has many years of years of political, development, and international law experience at the UN, and has worked extensively on humanitarian and refugee issues. She has also published and lectured on post-conflict, humanitarian, and child-protection issues. 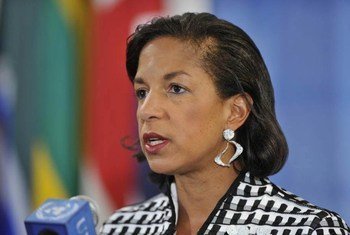 24 April 2012
The Security Council today emphasized the need for a speedier deployment of UN military observers to Syria and the implementation of a proposed peace plan to end the violence in the Middle Eastern country.