The United Nations human rights office today voiced concern at what it called a “disturbing” trend of killing journalists in Brazil, after another reporter was found dead earlier this week.

The killing of Décio Sá, an investigative journalist reporting on local politics, corruption and organized crime, brings to at least four the number of reporters murdered in the South American nation so far this year. He was gunned down in a bar on 23 April.

“We condemn his murder and are concerned at what appears to be a disturbing trend of killing journalists that is damaging the exercise of freedom of expression in Brazil,” said a spokesperson for the Office of the High Commissioner for Human Rights (OHCHR), Rupert Colville.

“We have long been concerned about the need for Brazilian human rights defenders, including journalists, to be able to conduct their work without fear of intimidation or worse,” he told a news conference in Geneva.

OHCHR welcomed the fact that state authorities have committed to conducting a thorough investigation and called for this and other similar cases to be treated as a major priority so that perpetrators are not emboldened by the prevailing lack of accountability for such crimes.

At the same time, it urged the Government to immediately implement protection measures to prevent any more such incidents.

A bill introduced into Congress in 2011, ordering police investigations into crimes against journalists to be conducted at a federal level, would be a step in the right direction, said Mr. Colville.

“We hope this and other measures to protect journalists will be adopted as a matter of some urgency,” he added. 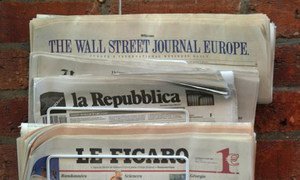 The head of the United Nations agency tasked with defending press freedom today condemned the murders of two Brazilian journalists earlier this month and called for thorough investigations of the killings.