Secretary-General Ban Ki-moon today praised India’s economic development and called on the country to build on it by implementing policies that reduce inequalities among society and take into account environmental and social factors.

“Growth is not enough. The world needs inclusive growth that reduces inequalities – growth that moves people from the margins to the mainstream – growth that integrates the economic, social and environmental instead of growth that pits these goals against each other,” Mr. Ban said in his remarks at Jamia Millia Islamia University in the capital, New Delhi.

Mr. Ban noted that as one of the largest economies in the world, India has a key role to play at the UN Sustainable Development Conference (Rio+20) in Brazil in June, where issues such as food security and universal access to water will be at the top of the agenda.

In particular, Mr. underlined that Rio+20 will provide an opportunity to advance on the goal of achieving sustainable energy for all, a crucial concern in a country where 55 per cent of the rural population lacks electricity.

Mr. Ban emphasized that innovative partnerships among India’s various sectors and with other countries will be an essential component to achieve inclusive development and address some of its most pressing needs, such as improving women and children’s health.

“Every week, more than 1,000 Indian mothers die from pregnancy or childbirth. Every 20 seconds, an Indian child under five dies from a largely preventable cause,” Mr. Ban said. “This is one of the most difficult development challenges we face anywhere around the world.”

Mr. Ban also praised India’s multiculturalism and hailed it as an example of how various cultures, religions and languages can come together and not only tolerate and understand each other but collaborate on a daily basis.

During his visit, Mr. Ban met Prime Minister Manmohan Singh, with whom he discussed the role of the South Asian nation in the region, as well as the latest developments in peace and security in Syria. They also talked about the relationship between India and Pakistan and of ways to further the democratization of Myanmar, ahead of Mr. Ban’s visit to the country on Sunday.

Mr. Ban thanked Mr. Singh for India’s extraordinary contribution to peacekeeping efforts around the world, as well as to the UN Democracy Fund. India is the world’s third largest troop contributor to UN peacekeeping, and the second-largest contributor to the Fund.

Mr. Ban will head to Mumbai tomorrow before leaving for Myanmar on Sunday. This is Mr. Ban’s third visit to India in his capacity as Secretary-General. 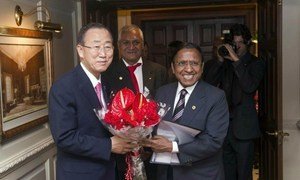 Secretary-General Ban Ki-moon kicked off his visit to India today by commending the country’s progress on health, while highlighting the need to do more to promote the well-being of women and children.