26 April 2012
International trade plays a key role in expanding demand and supply of environmentally friendly goods and services and helping countries shift to a greener development path, experts said during a panel debate at a United Nations trade and development conference in Doha, Qatar, which ended today.

Experts stressed that trade will be an essential factor in ensuring economic growth without increasing environmental risks, as well as social disparities and poverty – and emphasized the importance of addressing this issue during the upcoming UN Conference on Sustainable Development (Rio+20), which will be held in Rio de Janeiro, Brazil, in June.

The panel was part of the events held during the 13th session of the UN Conference on Trade and Development, known as UNCTAD XIII, the first ministerial conference on trade and development since the fallout from the 2007-2008 global economic crisis. The sessions are held every four years, and the theme of this year’s session is ‘Development-centred globalization: Towards inclusive and sustainable growth and development.’

During the panel discussion on Wednesday, UNCTAD’s Secretary-General, Supachai Panitchpakdi, underlined that while markets can help with structural transformations needed to move towards a green economy, governments play an essential role as regulators and supporters of sustainable trade policies.

“Each country has to define its own path towards a green economy,” Mr. Supachai said, adding that trade can stimulate the diffusion of clean technologies by transmitting to countries the growing environmental preferences of consumer in world markets.

Mr. Supachai recommended the creation of an initiative that could assist developing countries to seize trade opportunities that arise from the emerging global green economy and the establishment of a Global Trade and Green Economy Forum where States can engage in dialogue and address their concerns about “green protectionism” as many countries fear that implementing greener measures may put them at a disadvantage in the global market.

“We are facing multiple challenges and crises that are clearly interconnected. Rio+20 should offer real opportunities to rethink the current perception of growth, consumption and production patterns, and well-being,” said the Minister for Public Enterprises, Scientific Policy, and Development Cooperation of Belgium, Paul Magnette, who was also one of the panellists in the discussion.

The panellists highlighted initiatives to help countries make the transition to greener trade, such as UNCTAD’s BioTrade programme, which helps developing countries gain market access for their products made from the sustainable use of their flora and fauna. Countries such as Peru and Indonesia have taken advantage of this initiative, with Peru’s biodiversity-based product exports having increased ten-fold over the last ten years, and Indonesia having seen a significant growth in its natural cosmetic products industry.

UNCATD XIII, which involved negotiations, panel discussions and ministerial meetings among other events, lasted for six days, and the resulting text, known as the Doha Mandate, was agreed today on by consensus by its 194 Member States after negotiations over the previous months.

On UNCTAD XIII’s theme of “development-centred globalization,” the Doha Mandate states that “several challenges have to be met to realize development-centred globalization. In this regard, finance should support the real economy in support of sustained, inclusive and equitable economic growth and sustainable development. All countries, developed and developing alike, can pay serious political, economic and social costs from financial shocks.”

It also states that another challenge is eliminating hunger and achieving food security, noting that “securing adequate access to food – one of the most basic human needs – is a priority.” Issues related to energy must be addressed, the outcome text says, including volatile prices and access, including access to renewable energy.

“Development-centred globalization sets the stage for inclusive growth and development, and contributes towards reducing poverty and creating jobs,” the Doha Mandate continues. “Discussions on globalization should be balanced, highlighting its benefits, acknowledging its risks and addressing its challenges.”

Other issues highlighted by the text include obtaining access to renewable energy, dealing with public debt, and disseminating technology to developing countries. 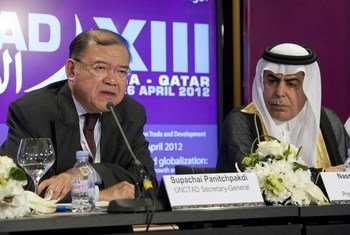 20 April 2012
On the eve of a major United Nations ministerial conference on international trade and development, a senior UN official today said the event is taking place at a turning point during which leaders of the global community must step forward to lead the world out of “round after round of financial crisis.”