26 April 2012
Marking the 26th anniversary of the worst nuclear power plant accident in history, Secretary-General Ban Ki-moon today called on the international community to generously support Chernobyl-affected regions as they continue their efforts towards recovery and normalcy.

One year ago, Mr. Ban became the first United Nations Secretary-General to visit the Chernobyl site, witnessing first hand the “great resilience” being demonstrated by the people affected by the explosion that occurred at the plant in Ukraine in 1986.

“On this occasion, we remember the hundreds of emergency workers who risked their lives in responding to the accident; the more than 330,000 people who were evacuated from surrounding areas with little hope of return; the thousands of children who later contracted thyroid cancer; and the six million people still living in the affected areas of Belarus, the Russian Federation and Ukraine,” said a statement issued by the Secretary-General’s spokesperson.

“As we pay our respects to the past, we also need to take stock and look ahead,” it added.

The statement noted that the UN is fully committed to the Decade of Recovery and Sustainable Development, proclaimed by the General Assembly for 2006-2016, and to the UN Action Plan on Chernobyl, which contains a declaration of principles embraced by all UN agencies involved in recovery efforts.

The Action Plan emphasizes social and economic development and the promotion of healthy lifestyles and community self-reliance.

“In the remaining years of the Decade, the focus will be on helping the targeted communities adapt to the conditions in which they are living,” said the statement.

It added that the urgency of strengthening the global nuclear safety regime was underscored by the nuclear accident at the Fukushima nuclear power plant in Japan last year.

Following what he described as an “extremely moving” visit to the Chernobyl site last April, Mr. Ban stressed the need to overcome perceptions that the affected region in the three countries “is poisoned forever” and to instead start a “new chapter, with new understanding.”

“Science has shown that normal life is fully possible for most people living in areas affected by the Chernobyl disaster,” he added. “What these areas need most is recovery and development: new jobs, fresh investment, the restoration of a sense of community.” 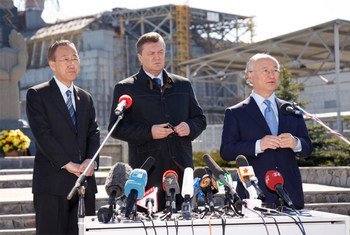 20 April 2011
Making the first visit by a United Nations Secretary-General to Chernobyl, the site of the April 1986 nuclear accident, Ban Ki-moon today paid tribute to the many victims of the disaster and called for a “new chapter” to begin in the areas still affected.