The Global Fund/John Rae
Eliminating places where mosquitoes lay their eggs, such as rain water collection barrels, to protect against malaria.

25 April 2012
Secretary-General Ban Ki-moon today called on countries to intensify their efforts to combat malaria, stressing that despite remarkable progress in recent years, much more needs to be done to end the “monumental tragedy” of one child dying every minute from the disease.

In his message to mark World Malaria Day, Mr. Ban highlighted the role international partnerships between governments, international agencies, donors, corporations and civil society organizations, among other actors, which have saved millions of lives through their work.

“A global coalition has boosted proven strategies, including long-lasting insecticidal nets, indoor spraying, rapid diagnostic tests and anti-malaria medicines for populations at risk,” Mr. Ban said. “More children are sleeping safely under nets, more families are gathering in rooms protected from mosquitoes, more communities have access to testing, and more patients get the medicines they need to recover.”

Malaria, which is caused by a parasite transmitted to humans through the bites of infected mosquitoes, infects 216 million people and kills nearly 650,000 people around the world every year, with most of the deaths occurring in Africa.

Mr. Ban called for countries to collectively pledge to close the $3.2 billion funding gap to achieve universal coverage in Africa up to 2015, and ultimately eliminate the disease.

“Now is the time to push for much greater progress,” Mr. Ban said, emphasizing that there should be no excuses about making “smart and affordable” investments in malaria interventions as the costs are relatively low. A rapid diagnostic test costs 50 cents, while a course of an anti-malaria drug costs only about $1. A bed net that lasts three years and can protect several children costs approximately $5.

Observing World Malaria Day in Namibia, the Director-General of the World Health Organization, Margaret Chan, said that to accelerate progress countries need to focus on scaling up their investments in diagnostic testing, treatment, and surveillance for malaria, which is the focus of WHO’s new initiative, known as Test, Treat and Track.

“Until countries are able to test, treat, and report every malaria case, we will never defeat this disease,” said Ms. Chan. “We need strong and sustained political commitment from all countries where malaria is endemic, and from the global health community, to see this fight through to the end.”

The Executive Director of the Roll Back Malaria Partnership, Thomas Teuscher, underlined that sustaining gains in Africa will require continued political commitment and funding.

“An estimated three million lives can be saved between now and 2015, if we continue to work in partnership and if governments in endemic countries redouble their efforts to provide people with essential health services,” he said.

To help countries obtain access to anti-malaria medicines, the Global Fund to Fight AIDS, Tuberculosis and Malaria announced today the launch of a new initiative that will allow people in remote communities in Africa to buy treatment in private stores and pharmacies for less than $1.

The initiative, called Affordable Medicines Facility for Malaria (AMFm) is making anti-malaria medicines, called artemisinin-based combination therapies, available as widely and inexpensively as possible to those who need them.

“The innovation is working, bringing relief to millions who need quality anti-malaria medicines at affordable prices. The AMFm is a game-changer in financing access to malaria treatments,” said the head of the AMFm initiative at the Global Fund in Geneva, Olusoji Adeyi. 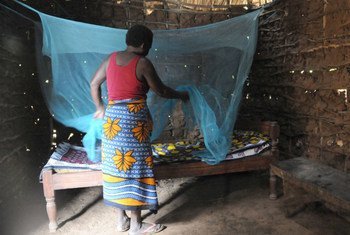 23 April 2012
An increase in collaboration and partnerships among donor and recipient countries must occur to boost efforts to prevent and treat malaria, a United Nations envoy stressed today, while also calling for an increase in funding to combat the deadly disease.