UN Photo/Fabrice Arlot
John Ging, Director of Operations at the UN Office for the Coordination of Humanitarian Affairs.
25 April 2012

A senior United Nations humanitarian official has commended the ongoing efforts to assist some 7.2 million people affected by flooding and insecurity in Pakistan, while urging donors to step up support to sustain the response.

The Director of Operations for the UN Office for the Coordination of Humanitarian Affairs (OCHA), John Ging, saw first-hand the response by aid agencies and the Government of Pakistan during a three-day visit to the country.

The Pakistani Government and the humanitarian community have been working together in the provinces of Sindh and Balochistan to help 5.2 million people recover from last year’s devastating floods.

In February, the UN and the Government jointly launched the Early Recovery Framework, which includes building resilience against future crises by developing early warning systems and constructing homes that will withstand natural disasters.

In addition to the floods, insecurity in the Federally Administered Tribal Areas of Pakistan has led to the displacement of hundreds of thousands of people since mid-January. The fighting has driven a large number of families to flee to the safety of the Jalozai camp, where UN agencies are providing them with humanitarian supplies.

“I am truly impressed at the speed and standard of the response,” Mr. Ging said during a visit to the camp, adding that “now, our preoccupation is with funding, as many agencies will run out of money by the end of May.”

While the Government, donors, UN agencies and their implementing partners have given hundreds of millions of dollars to save lives and support recovery in Pakistan, the UN estimates that a further $840 million is needed to help families to recover from the effects of flooding and insecurity. 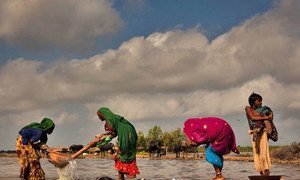 The United Nations and the Pakistani Government today jointly requested $440 million to help people affected by last year’s floods in the south of the country recover their sources of livelihood, including agriculture, restore basic social services, and repair damaged infrastructure.