Recent moves in a number of countries to limit the freedom of non-governmental organizations (NGOs) are seriously undermining human rights, a United Nations senior official said today, urging governments to revise proposed laws that would restrict their capacity to operate independently and effectively.

“A dynamic and autonomous civil society, able to operate freely, is one of the fundamental checks and balances necessary for building a healthy society, and one of the key bridges between governments and their people. It is therefore crucial that NGOs are able to function properly in countries in transition, as well as in established democracies,” she added.

Ms. Pillay spotlighted cases in several countries around the world such as Egypt, Zimbabwe, Cambodia, Israel and Venezuela, among others, where recent regulations or attempts to pass regulations are curtailing NGOs’ abilities to operate in those countries.

In the case of Egypt, a draft law would give the Government too much power to regulate, monitor and restrict the world of civil society organizations. “If passed in its current forms, [it will] seriously undermine the spirit of Egypt’s revolution, in which civil society played such a pivotal role,” Ms. Pillay said.

Ms. Pillay noted that it is particularly important to protect freedom of association, which is under increasing pressure in many countries. She cited the case of Zimbabwe, where provincial authorities ordered the suspension of the activities of 29 NGOs in February.

The human rights chief also pointed to a proposed law in Cambodia, which would allow the Government to close down NGOs if their activities are deemed to harm national unity, culture and customs without giving them the right to appeal. A similar law was passed in Algeria.

“Civil society actors help mobilize people to become involved in decisions that affect their lives,” Ms. Pillay said. “If their contribution is weak or restrained, the needs of ordinary people are too easily sidelined, and in particular the needs of the people most discriminated against in any given society.”

Ms. Pillay also expressed concern about ongoing attempts to restrict NGOs’ funding, in particular foreign funding, on which many civil society organizations rely heavily. In Ethiopia, many NGOs have been forced to close due to a 2009 law which prevents them from receiving more than ten per cent of their funding from abroad; and, in Israel, a recently adopted law subjects them to rigorous reporting requirements on foreign funding, with heavy penalties for non-compliance.

In addition, in a law passed in Venezuela in January by the country's congress places NGOs under permanent surveillance by a state organ and imposes restrictions on foreign funding.

“NGOs must be able to operate free from executive interference,” Ms. Pillay said. “Governments need to understand that collaboration with civil society is not a sign of weakness. It is the way to build a better, more inclusive, society – something all governments should be trying to do, and something they cannot manage on their own.”

♦ Receive daily updates directly in your inbox - Subscribe here to a topic.
♦ Download the UN News app for your iOS or Android devices.
non-governmental+organizations 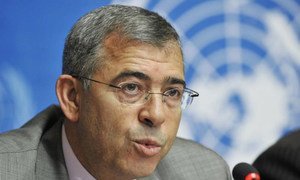 The United Nations human rights office voiced alarm today at reports that the Egyptian military has carried out raids against the offices of non-governmental organizations (NGOs) in what would be the first documented incidents of their kind in the country's recent history.