23 April 2012
Secretary-General Ban Ki-moon will later this week head to Myanmar, which he said is at a “critical” moment in its transition, preceded by an official visit to India.

“Myanmar is only at the beginning of its transition. Many challenges lie ahead. Many concerns have yet to be addressed. Yet I am convinced that we have an unprecedented opportunity to help the country advance toward a better future,” Mr. Ban told reporters at UN Headquarters.

Speaking after a meeting of his Group of Friends on Myanmar, the Secretary-General noted that there have been “encouraging” political and economic reforms over the past year-and-a-half in the South-east Asian nation, including recent landmark elections and important steps toward reconciliation.

“We have come to what I believe is a critical moment in Myanmar’s transition. And now is the time for the international community to stand together at Myanmar’s side,” he said, adding, “yet we also recognize: this fresh start is still fragile.”

“Working together, they have come far. Working together, I am confident that they will go further still,” he said. “And together, we will explore the many tangible and practical ways in which the UN can help.”

The visit to Myanmar, at the invitation of President Thein Sein and the third for Mr. Ban since he became UN Secretary-General in 2007, will follow an official visit to India that begins later this week.

His first stop will be Delhi, where he will have meetings with India’s senior political leadership to discuss current regional and international issues, as well as matters of global concern. The Secretary-General will also receive an honorary doctorate degree from Jamia Islamia University.

He will then visit the commercial hub of Mumbai, where he will meet the Chief Minister of Maharashtra State, Prithviraj Chavan, and meet a small group of key business leaders committed to utilizing their expertise to promote the health of women and children. The UN chief will also visit health facilities where he will witness first-hand the progress being made in communities through his discussions with women, children and health workers.

The visit to India will conclude with an event, hosted by Millennium Development Goals (MDGs) Advocates Mukesh Ambani and Ray Chambers, that will include the participation of representatives from government, the private sector, civil society, the creative community and the UN.

The globally agreed MDGs range from halving extreme poverty to halting the spread of HIV/AIDS and providing universal primary education, all by the target date of 2015.

With Syria at ‘pivotal’ moment, UN officials call for full cessation of violence 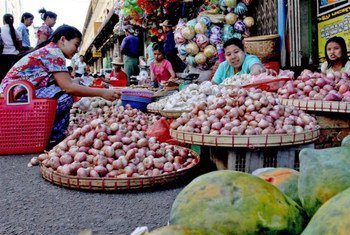 Ban praises Myanmar for peaceful conduct of by-elections on Sunday

2 April 2012
Secretary-General Ban Ki-moon today congratulated the people and Government of Myanmar for the “peaceful and largely orderly” manner in which by-elections were held on Sunday.