21 April 2012
Raising the possibility of targeted sanctions, the United Nations Security Council today demanded the immediate restoration of constitutional order in Guinea-Bissau, as well as the reinstatement of the West African country's legitimate government.

Raising the possibility of targeted sanctions, the United Nations Security Council today demanded the immediate restoration of constitutional order in Guinea-Bissau, as well as the reinstatement of the West African country's legitimate government.

“The Security Council further demands the immediate and unconditional release of the interim President Raimundo Pereira, Prime Minister Carlos Gomes Júnior and all officials currently detained in order to enable the completion of the presidential and legislative elections,” the 15-member said in a presidential statement, following a meeting.

Soldiers in Guinea-Bissau – a country with a history of coups, misrule and political instability since it gained independence from Portugal in 1974 – seized power earlier this month. The putsch came ahead of the presidential run-off election that was slated for 22 April between Mr. Gomes Júnior and a former president, Kumba Yala.

In its statement, the Council said it was prepared to consider possible further measures, including targeted sanctions against the perpetrators and supporters of the military coup, should the situation remain unresolved.

It also reiterated its strong condemnation of the coup, and expressed deep concern over reports of violent repression of peaceful demonstrations, looting, restriction of freedom of movement, the arbitrary detention of civilians and demands their release.

It said it welcomed and supported the engagement of the African Union, the Economic Community of West African States and the Community of Portuguese Speaking Countries, and encouraged closer coordination of their efforts to restore constitutional order in Guinea-Bissau.

The Council asked Secretary-General Ban Ki-moon – who has also condemned the coup – to keep it informed of developments in the West African country and to submit a report, by the end of April, on the re-establishment of the constitutional order there.

The UN Secretariat is in close consultation on the situation in the country with the Special Representative of the Secretary-General to Guinea-Bissau, Joseph Mutaboba, and the UN team on the ground.

Cyprus: not enough progress in talks to call for international conference – Ban 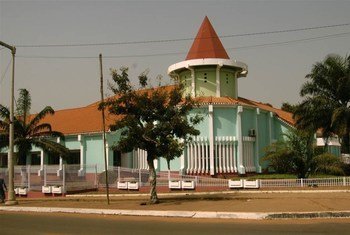 19 April 2012
The United Nations envoy for Guinea-Bissau today urged the international community to ensure that any solution for the current political crisis in the West African country is based on a process that reflects the will of the people and a commitment to the restoration of constitutional order.