Sudan and South Sudan do not need another war, Ban stresses

UNEP
Almost half of Sudan’s oil is pumped out of Heglig.
19 April 2012

Secretary-General Ban Ki-moon today urged Sudan and South Sudan to end their hostilities, stressing that they must avoid a return to conflict, which has already cost them millions of lives over two decades.

“The last thing the people of these two countries need is another war – a war that could claim countless lives, destroy hope and ruin the prospects of peace and stability and prosperity of all Sudanese people,” Mr. Ban said at a press encounter at UN Headquarters in New York.

“I urge both sides to exercise maximum restraint, return to the negotiation table and resolve their differences,” he added.

Mr. Ban called on South Sudan to immediately withdraw its forces from the oil-producing region of Heglig in Sudan’s South Kordofan state, describing this as “an infringement on the sovereignty of Sudan and a clearly illegal act.”

He also called on the Government of Sudan to immediately stop shelling and bombing South Sudanese territory and withdraw its forces from disputed territories, in particular Abyei.

“This is not the time for war,” the Secretary-General said. “This is a time for leadership, for engagement, for negotiation – in the name of humanity, and in the interests of the people of both countries and the region. Along with regional and many international leaders, I have impressed on both governments the necessity of ending the fighting and returning to negotiations. They have yet to heed our call.”

The UN will continue its efforts and stands ready to help both parties, he said, adding that those countries that have influence on the two governments must step up their efforts at this “critical moment.”

Last week, the Security Council voiced growing alarm at the escalating conflict between the two countries, warning that fighting threatens to take them both to full-scale war. 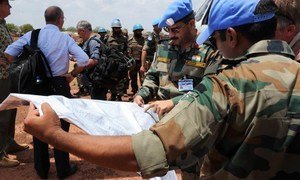