The lead United Nations agency dealing with the global AIDS response today called on all countries to implement new guidelines that encourage couples to go together for HIV testing to ascertain their status.

“By encouraging couples to test together, we can provide comprehensive options for HIV prevention and treatment that they can discuss and manage jointly,” the Executive Director of the Joint UN Programme on HIV/AIDS (UNAIDS), Michel Sidibé, said in a news release.

The guidelines, released by the UN World Health Organization (WHO), also recommend that in couples who are serodiscordant – where one partner is living with HIV and the other not – antiretroviral therapy is offered to the person living with HIV to prevent his or her partner from becoming infected with the virus.

The guidance also states that it is possible for couples to stay HIV serodiscordant indefinitely if they consistently practice safer sex using condoms.

According to the new guidelines, couples who test together and mutually disclose their HIV status are more likely than those testing alone to adopt behaviour to protect their partner. Testing together and sharing results also enables couples to support each other, if one or both partners are HIV-positive, to access and adhere to treatment and prevent transmission of HIV to children.

“I am excited that with the rollout of these new guidelines, millions of men and women have one additional option to stop new HIV infections,” said Mr. Sidibé. “This development begins a new era of HIV prevention dialogue and hope among couples.”

According to UNAIDS estimates, around 14 million people are eligible for antiretroviral treatment. At the end of 2011, only 6.6 million people were receiving the life-saving medicines. The guidelines recommend that in situations of limited or inadequate resources, people who require antiretroviral therapy for their own health should always be given priority. 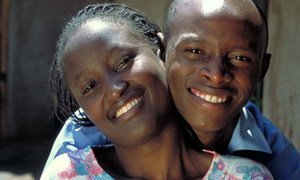 The United Nations today welcomed the results of studies that show that taking a tablet of an antiretroviral drug daily can reduce the risk of acquiring HIV by up to 73 per cent in people not infected by the virus that causes AIDS.