Under its Energizing for Development Initiative, the European Commission – the EU’s executive body – aims to support the provision of sustainable energy services to 500 million people in poorer countries by 2030.

“I commend the European Union for making energy central to its development policies, and for advancing the issue of energy access, along with renewable and energy efficiency, to the forefront of the global development agenda,” said Mr. Ban, addressing the EU Sustainable Energy for All Summit in Brussels.

José Manuel Barroso, President of the European Commission, announced that the initiative will also create a Technical Assistance Facility worth €50 million, drawing on EU experts, to develop technical expertise in developing countries.

In the lead up to the UN Conference on Sustainable Development Rio+20 in June, the EU and its Member States will seek to mobilize additional resources to support new investments in sustainable energy in developing countries, with the goal of leveraging even greater flows of investment from the private sector.

“Without energy access, we simply will not meet the Millennium Development Goals [MDGs],” said Mr. Barroso. “That’s why we’ve organised today’s summit – we are committed to the aim of providing universal access to sustainable energy for all by 2030,” he said.

Mr. Ban said the EU’s strong political commitment to access to sustainable energy will “enable developing countries to leapfrog over the energy systems of the past and build the resilient, competitive, clean energy economies of the future.”

The Secretary-General’s Sustainable Energy for All initiative is designed to catalyze global action in support of three, interlinked and complimentary objectives, all to be achieved by 2030 – ensure universal access to modern energy services, double the global rate of improvement of energy efficiency, and double the share of renewable energy in the global energy mix.

The International Energy Agency estimates that 1.3 billion people – one in five globally – lack electricity to light their homes or conduct business. Twice that number – nearly 40 per cent of the world’s population – rely on wood, coal, charcoal or animal waste to cook food, resulting in toxic smoke that causes lung disease and death.

On the sidelines of the summit, the Executive Director of UN Women, Michelle Bachelet, and Catherine Ashton, the EU’s High Representative for Foreign Affairs and Security Policy, signed a partnership agreement designed to strengthen cooperation between the two organizations on their work on empowering women and gender equality.

Cooperation under the new UN Women-EU Memorandum of Understanding will primarily focus on ensuring women’s representation in decision-making in the fields of economics, politics and justice worldwide, as well as better access for women to work and social opportunities.

Speaking to reporters after meeting with Herman Van Rompuy, the President of the European Council, Mr. Ban described the EU as “a key strategic partner” of the UN on issues that range from peace and security to development and human rights.

“The UN receives first-rate political and financial backing from the European Union for conflict prevention initiatives and for our peacekeeping operations around the world,” said the Secretary-General.

He said that in the course of his separate meetings with Mr. Van Rompuy, Mr. Barroso and the EU High Representative for Foreign Affairs and Security Policy, Catherine Ashton, discussions touched on situations of mutual concern, including Syria, Afghanistan, Iran, Sudan and South Sudan, Mali, Guinea-Bissau, Democratic People’s Republic of Korea, Cyprus and sustainable development.

Mr. Ban said that Mr. Van Rompuy had also explained to him how EU Member States have been working together to overcome the economic and financial crisis.

“I sincerely hope that, under the leadership of President Van Rompuy and other members of the European Union, Europe will be able to address and overcome the current economic and financial crisis, which will be mutually beneficial for all around the world,” the Secretary-General added.

Mr. Ban is now in Luxembourg, the last stop on his three-country European trip, which also took him to Switzerland. 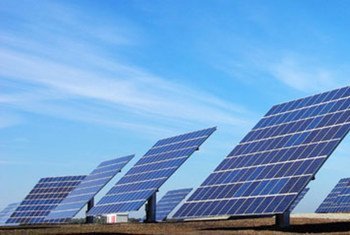 21 February 2012
Government policies that facilitate private sector investment in energy markets are crucial to help tap Africa’s massive renewable energy potential, which can fuel the continent’s poverty reduction efforts and put it on a path to sustainable development, according to a United Nations report released today.