Secretary-General Ban Ki-moon and the Security Council today strongly condemned the military coup that took place in Guinea-Bissau and demanded the immediate restoration of constitutional order.

Soldiers in Guinea-Bissau, a West African nation that has been beset by coups, misrule and political instability since it gained independence from Portugal in the early 1970s, seized power last night and are holding both the interim President, Raimundo Pereira, and Prime Minister Carlos Gomes Júnior.

The move comes ahead of the presidential run-off election that was slated for 22 April between Mr. Gomes Júnior and ex-president Kumba Yala.

“The Secretary-General underscores the need for the Armed Forces and its leadership to respect civilian authority, constitutional order and the rule of law, as well as to take urgent and immediate steps to return the country to civilian rule,” Mr. Ban’s spokesperson said in a statement.

The 15-member Council strongly condemned the forcible seizure of power from the Government by some elements of its armed forces, and called on these elements to ensure the safety and security of the two leaders and all senior officials currently detained, and demanded their immediate release.

“The members of the Security Council firmly denounce this incursion by the military into politics,” they said in a statement issued to the press. They also demanded “the immediate restoration of constitutional order and the legitimate Government to allow for the completion of the ongoing electoral process, including the legislative elections.”

In addition, the Council urged all parties to exercise maximum restraint, refrain from violence and remain calm.

Guinea-Bissau is one of six countries on the agenda of the United Nations Peacebuilding Commission – along with Burundi, Sierra Leone, the Central African Republic (CAR), Liberia and Guinea – set up in 2005 to help countries emerging from conflict make an irreversible transition from war to sustainable peace.

The Chair of the Commission’s country-specific configuration on Guinea-Bissau, Ambassador Maria Luiza Ribeiro Viotti of Brazil, also condemned the forcible seizure of power and urged the leadership of the armed forces to ensure the safety and security of the civilian authorities in the country.

“I call on the Armed Forces to return to the barracks and release all those they have detained. I further call on the Armed Forces, the political leaders and people of Guinea-Bissau to remain calm, exercise restraint, maintain stability and respect the constitutional order and the democratic process,” Ms. Ribeiro Viotti said, adding that urged all parties to resolve their disputes through political and peaceful means within the framework of its democratic institutions.

The UN Secretariat is in close consultation on the situation in the country with the Special Representative of the Secretary-General to Guinea-Bissau, Joseph Mutaboba, and the UN team on the ground.

Mr. Mutaboba is head of the UN Integrated Peacebuilding Office in Guinea-Bissau (UNIOGBIS), which was set up by the Council in 2009 to promote stability in the country. 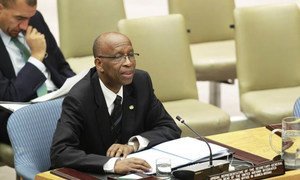 The United Nations envoy for Guinea-Bissau today stressed the need for strong international engagement to help the country complete the current political transition and move ahead on priorities such as reforming the security sector and tackling drug trafficking and organized crime.