12 April 2012
Secretary-General Ban Ki-moon said that the situation in Syria is calmer today, the day a cessation of hostilities was due to come into effect, but stressed that the onus is on the Government to prove that its words will be matched by deeds.

“The world is watching, however, with sceptical eyes since many promises previously made by the Government of Syria had not been kept,” Mr. Ban told a news conference in Geneva. “As of this afternoon, as of this moment, the situation looks calmer. We are following it very closely.”

He once again called on the Syrian Government to abide by its commitment under the six-point plan drawn up by the Joint Special Envoy of the United Nations and the League of Arab States, Kofi Annan, who is leading a diplomatic effort to bring the bloodshed to an end.

Mr. Annan’s six-point proposal calls for an end to violence, access for humanitarian agencies to provide relief to those in need, the release of detainees, and the start of inclusive political dialogue that takes into account the aspirations of the Syrian people.

The UN estimates that more than 8,000 people, mostly civilians, have been killed and tens of thousands displaced since the uprising – part of the broader Arab Spring movement across North Africa and the Middle East – began in March last year.

Mr. Ban said it is difficult to fully assess the situation on the ground in Syria in the absence of UN observers to oversee the implementation of the cessation of hostilities.

“Therefore, we are working with the Security Council to send an observer team as promptly as possible,” he said. “If we are to stop Syria’s descent into chaos, the international community must speak and act as one.”

He also called on the Syrian opposition to respect the cessation of hostilities, stressing that it was time “for a fundamental change of course.” Mr. Ban appealed to all friends of Syria to exercise maximum influence to halt what he described as a “tragic conflict.”

Earlier today, Mr. Annan issued a statement, saying that he is encouraged by reports that the situation in Syria is relatively quiet today and that the cessation of hostilities appears to be holding.

“Syria is apparently experiencing a rare moment of calm on the ground,” said Mr. Annan “This is bringing much-needed relief and hope to the Syrian people who have suffered so much for so long in this brutal conflict.”

He said calm must now be sustained and that all parties have obligations to fully implement his six-point plan to bring the violence to an end.

Bahrain: Ban condemns bombing, voices concern over use of force against protesters 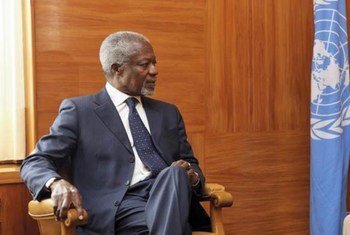 10 April 2012
The Joint Special Envoy of the United Nations and the League of Arab States, Kofi Annan, today urged the Syrian Government and opposition forces to stop the violence, stressing that all hostilities must end by Thursday morning.