11 April 2012
Close to a million Rwandans were killed during the 1994 genocide in Rwanda.

Artist Odile Katese was in exile at the time. Despite being far from the killing, she was not immune to the deadly events and their repercussions. Returning three years later, she barely recognized her country.

During the genocide, many children witnessed the killings of their parents. Here, children who fled Rwanda rest in a camp in the neighbouring Democratic Republic of the Congo. UN Photo/J. Isaac

The tragic events there – more than 800,000 Rwandans, mostly ethnic Tutsi, were massacred by Hutu militia and government forces over a period of just 100 days – occurred despite the existence of the Genocide Convention of 1948, which makes it a crime to commit genocide. In response to this collective failure and in an effort to learn from the past, the United Nations outlined an action plan for the prevention of genocide in 2004.

In Ms. Katese’s case, it led to the idea of the “The Book of Life.” The project is a collection of letters "from the living to the dead," written by widows, orphans and perpetrators to their lost loved ones and to their victims.

A genocide survivor speaks at the General Assembly meeting to mark the tenth anniversary of the genocide in Rwanda. UN Photo/D. Berkowitz

The idea for the project came to Ms. Katese as she witnessed the pain Rwandans were experiencing recounting memories of those who had been killed. It prompted her to find a way to revisit the genocide “in a more peaceful way because we have to make peace with our history.”

“The one thing that seemed to hurt Rwandans the most was the fact that the victims were dead and nothing else,” Ms. Katese said.

Since the genocide occurred, the Secretaries-General have placed great importance on preventing a repeat of the events, as well as honouring its victims. Here, former Secretary-General Boutros Boutros-Ghali places a flower wreath next to a shed in which lie the remains of civilians massacred in the genocide. UN Photo/C. Dufka

“What if we could create a very symbolic way of keeping in touch and, in this way, somehow bring peace to both the dead and the living,” the artist said, adding that the writing process itself was healing and essential. “I think it is really important to write your pain and nostalgia. You feel lighter and more serene.”

Seeking to “balance the testimonies,” the project aims to create a more serene and peaceful space from which Rwandans can revisit and process the genocide, so that they can move forward, the artist said. It seeks to put a more “human face” on the lengthy list of names traditionally read aloud each year during genocide commemorative ceremonies, and strives to commemorate the victims’ lives, rather than their deaths. The letters often recount how the lost ones laughed and brought joy to life.

In 2004, on the 10th anniversary of the genocide, former Secretary-General Kofi Annan outlined a five-point action plan for preventing genocide. Here, he and his wife visit a burial site of genocide victims. UN Photo/M. Grant

“There have been many efforts to rebuild the country, this project tries to help Rwandans heal and move forward with their lives at a much more personal level,” Ms. Katese said, adding that she hopes that by participating in an interactive project such as hers, Rwandans can reconcile themselves with themselves, and with life and death.

“This is about memories that reconcile you with your self, it's a memory that appeases your pain, and brings to life the victims of the genocide…because I think that, over time, if we tell the story of how they die, we kill them again and again,” she said.

In the years after the genocide, the UN General Assembly declared 7 April the International Day of Reflection on the Genocide in Rwanda and called for the establishment of an information and educational outreach programme to “mobilize civil society for Rwanda genocide victim remembrance and education in order to help prevent future acts of genocide.”

“Let us continue to work together to ensure a future forever free of genocide. This would be the most fitting way to remember those lost in Rwanda 18 years ago, and to honour the resilience of the survivors,” said Secretary-General Ban Ki-moon at the 2012 commemoration of the genocide. Here, he and his wife lay a wreath at the Rwanda Genocide Memorial Museum. UN Photo/E. Debebe

“The Book of Life” will be featured at this year's commemoration event at UN Headquarters in New York, taking place today, the theme of which is “learning from history to shape a brighter future.” Actors and UN representatives will be reading a selection from the collection of letters after a candle lighting ceremony.

"These letters remind us of an essential truth: that mass atrocities are the accumulation of thousands of individual murders," said the Secretary-General's Special Adviser on the Responsibility to Protect, Edward Luck. "For the families of each victim, the legacy of pain and loss will last for generations. But so too will the love and the memories captured so movingly in these letters. As they attest, in the end life does indeed triumph over death."

Ms. Katese said she hopes the “Book of Life” project will continue to grow, extending to generations beyond and across borders “so that my kid and the next generation will find the testimonies of the survivors, stories of perpetrators, and they will find also that we continued to think about them and even our kids can write to them if they want.”

She envisions setting up a space where people can write to the victims, remembering them and their lives, and having people from 100 countries write 100 letters on how they are affected by the genocide and having the collection bound into a school manual for all to learn from. 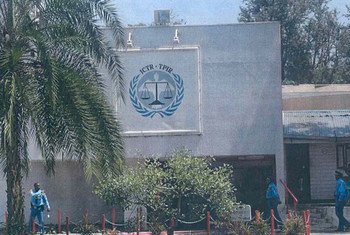 27 February 2012
The United Nations tribunal trying key suspects implicated in the 1994 genocide in Rwanda has transferred to Rwandan authorities the case of Fulgence Kayishema, an indicted former police inspector who remains at large.