11 April 2012
Secretary-General Ban Ki-moon today underscored the need to curb the volatility of global food prices through the strengthening of oversight and analysis of international commodities futures markets to discourage the speculation that leads to price fluctuations.

“Food and nutritional security are the foundations of a decent life. Action to curb food price volatility is essential,” said Mr. Ban, in his message to the General Assembly’s High-Level Thematic Debate on Excessive Price Volatility in Food and Related Commodity Markets, delivered on his behalf by the Assistant Secretary-General for Economic Development, Jomo Kwame Sundaram.

Opening the debate, the President of the General Assembly, Nassir Abdulaziz Al-Nasser, said that the discussion reflected a deep concern among Member States about the impact of excessive commodity price volatility on food security and sustainable development in developing countries.

Focus, he said, was “on the potential adverse impact on the most vulnerable populations, the vast majority of whom live in nations that are dependent on food imports to meet basic needs.”

The Assembly President noted that there was broad agreement that addressing the causes and consequences of food price volatility and food insecurity requires a comprehensive approach that must include new efforts to strengthen investment in agricultural production in developing countries.

“Where we have had robust debate, and where we clearly need to do much more work, is in developing our understanding of the role that financial markets have played in increasing food price volatility, raising uncertainty, and preventing effective action,” he said in his remarks at the close of the meeting.

On his part, Mr. Ban said the priority for agriculture should be to produce nutritious food that people need and ensure that it is accessible to them at all times. He added that the rise in prices had caused the number of hungry people worldwide to swell to over one billion, and it helped push millions of households below the poverty line.

“Consumers are increasingly at risk of sudden drops in purchasing power, leading almost immediately to damaging reductions in the consumption of nutritious foods, especially by women and girls,” the UN chief said.

The UN system, he noted, is working to address the structural challenges in world food systems. Since 2008, the Secretary-General’s High-Level Task Force on the Global Food Security Crisis has worked to promote a twin-track approach that includes increasing production and ensuring access to social protection and safety nets. 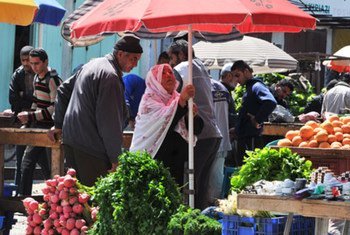