UNHCR/M. Hofer
A Congolese woman, displaced by LRA attacks, carries a bag of non-food items distributed by UNHCR in Dungu, DR of Congo.

11 April 2012
Senior officials from the United Nations and African Union (AU) are visiting the Democratic Republic of the Congo (DRC) and the Central African Republic (CAR) to strengthen a newly-launched joint initiative to counter the threat of the group known as the Lord’s Resistance Army (LRA).

In the DRC, the Special Representative of the Secretary-General for Central Africa, Abou Moussa, and the AU Special Envoy on the LRA issue, Francisco Madeira, will hold a working session in Kinshasa with authorities and regional and international partners involved in the fight against the LRA, which the AU has declared a “terrorist group.”

During the six-day visit, which began yesterday, the two officials will also travel to Dungu in the DRC’s north-eastern Orientale Province, where the DRC component of the Regional Task Force (RTF) authorized by the AU to track the LRA will be based.

“We are very concerned about the repeated attacks by the LRA in this region and elsewhere,” said Mr. Moussa, who is also the head of the UN Regional Office for Central Africa (UNOCA), in a press release. “It must stop now.”

More than 4,200 people have been displaced as a result of LRA activity in Orientale Province since the beginning of this year. The group was formed in the 1980s in Uganda and for over 15 years its attacks were mainly directed against Ugandan civilians and security forces, which in 2002 dislodged the rebels. It then exported its activities to Uganda’s neighbouring countries, with practices that include the recruitment of children, rapes, killing and maiming, and sexual slavery.

From Dungu, the UN-AU delegation will on Friday travel to Obo in south-eastern CAR, where another RTF contingent will be based. The officials will meet with the CAR and Ugandan soldiers who are currently participating in anti-LRA operations, with the support of a military unit from United States.

“We learned that the situation has improved in Obo,” said Mr. Moussa. “But we must remain vigilant, especially since several other cities in the south-east continue to suffer from the attacks of the LRA.”

The joint UN-AU mission to the DRC and CAR follows the March launch in Juba, South Sudan, of the UN-supported and AU-led Regional Cooperation Initiative against the LRA (RCI-LRA) and its military component, the RTF.

The RTF will comprise 5,000 soldiers drawn form the four countries affected by the LRA – Uganda, DRC, CAR and South Sudan. The task force has set up its headquarters in Yambio, South Sudan. It will have bases in Dungu, Obo and Nzara, South Sudan. 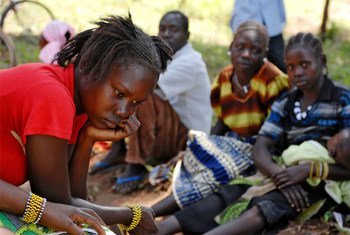 23 March 2012
With the backing of the United Nations and the African Union (AU), four African countries affected by the activities of the Lord’s Resistance Army (LRA) are launching a joint military task force to pursue the rebel fighters, including the group’s leader, Joseph Kony, UN and AU officials said today.