The top United Nations envoy to Iraq today underscored the need for the country’s leaders to work together to resolve outstanding issues, including the holding of a national dialogue, disputed internal boundaries and the human rights situation.

Martin Kobler, the Secretary-General’s Special Representative and head of the UN Assistance Mission for Iraq (UNAMI), told the Security Council that the withdrawal of United States armed forces in December 2011 and the recent hosting by Iraq of the League of Arab States Summit were important recent developments for the country.

At the same time, domestic political issues and the potential fallout from regional crises, including the one in Syria, “continue to pose obstacles for Iraq as it marches on the road to full recovery,” stated Mr. Kobler.

“The continued delays in convening the national conference underscore the urgent need for Iraqi leaders to summon the requisite political will and courage to work together to solve the country’s problems through an inclusive dialogue,” he added.

In his latest report to the Council, Secretary-General Ban Ki-moon highlighted the need to tackle outstanding issues to achieve national reconciliation, warning that if they are not addressed in a meaningful way, through an inclusive dialogue, they could lead to renewed political tensions and adversely impact the security situation.

In this context, he said the national conference proposed by President Jalal Talabani could provide “an important opportunity” to bring the current stalemate to an end and set in motion a dialogue that could address outstanding political differences. “I urge all concerned to redouble their efforts to make this conference a success and ensure that it is held in a spirit of inclusiveness, compromise and partnership, within the framework of the Constitution,” he stated.

Mr. Kobler reported in his briefing that until today there was no agreement on an agenda for such a conference. “An inclusive forum, however, is needed as a first step to end the political impasse. I call upon all Iraqi leaders to sit together to address all their differences in a meaningful way.”

He also highlighted specific concerns about human rights in the country in terms of civilian casualties, gender-based violence and the situations of minorities and internally displaced persons. He noted in particular that Iraq’s political situation is heightening communal tensions and leading to an increase in the number of attacks on civilians.

The envoy also welcomed several developments, including the recent steps taken by Iraq and Kuwait to normalize their relations and to resolve all remaining issues, and the endorsement by the Council of Representatives of the commissioners to serve on Iraq’s first independent High Commission for Human Rights.

In a related development, the Director-General of the UN Educational, Scientific and Cultural Organization (UNESCO) today called for an investigation into the murder of Iraqi TV presenter Kamiran Salaheddin.

A journalist in his mid-30s and father of two, Mr. Salaheddin presented a news and current events programme on Salahaddin TV. He was killed by a bomb placed under his car in his home city of Tikrit on 2 April.

“His killing is not only a crime against an individual, but also against the universally recognized human right of freedom of expression,” Irina Bokova stated in a news release. 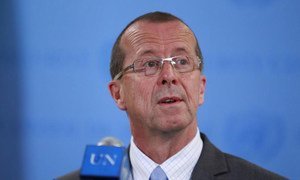 The United Nations top envoy in Iraq has encouraged the country’s Government and members of its civil society to continue promoting and protecting the role of minority groups in Iraqi cultural and political life.