The Joint Special Envoy of the United Nations and the League of Arab States, Kofi Annan, today urged the Syrian Government and opposition forces to stop the violence, stressing that all hostilities must end by Thursday morning.

“We still have time between now and the 12th to stop the violence and I appeal to all concerned, the Government in the first place, and the opposition forces,” Mr. Annan said at a press conference in Turkey.

Last week, the Syrian Government told Mr. Annan that it would complete the withdrawal of troops by 10 April. The Envoy has stated that, once that happens, all parties should move immediately to cease all forms of violence, so that a complete cessation is in place by 06:00 Damascus time on 12 April.

A UN team visited the country in recent days to start technical preparations for the potential deployment of observers to monitor a cessation of armed violence and the full implementation of Mr. Annan’s six-point peace plan.

Mr. Annan reiterated his conviction that his plan, which was submitted last month during his visit to Damascus, can still be implemented.

“I believe it’s a bit too early to say that the plan has failed,” Mr. Annan said. “The plan is still on the table and it’s a plan we are all fighting to implement. It’s a plan the Council has endorsed, a plan the Syrians have endorsed, and from the comments made by the opposition they are also prepared to go along with it if the Government meets its commitments to pull the troops out. So the plan is very much alive.”

Mr. Annan said he would submit a report to the Security Council today sharing the information he has received from the Syrian Government on troop withdrawals, and stated that there have been indications of the Government withdrawing in various cities.

However, he expressed concern over reports from other sources indicating that there have been military movements to other areas which have not previously been targeted.

The Council met today behind closed doors to discuss a letter received from Mr. Annan regarding the status of his plan. Ambassador Susan Rice of the United States, which holds the Council’s rotating presidency for April, told reporters afterwards that members underscored elements of the letter, including the need for the Syrian leadership to seize the opportunity to make a fundamental change of course.

“It’s essential that the next 48 hours bring visible signs of immediate and indisputable change in the military posture of the Government forces throughout the country, as called upon by the six-point plan,” she stated.

Council members also echoed Mr. Annan’s call to urge the opposition to also fulfil their commitments to the six-point plan and “give no excuse for the Government to renege on its commitment.” The 15-member body is slated to receive an update from Mr. Annan on Thursday.

While in Turkey today, the Joint Special Envoy also visited a camp for Syrian refugees before leaving for consultations in Iran. He described the stories he heard from the refugees as “heart-wrenching” and stressed the need to create the conditions for them to return home sooner rather than later.

“There is no more time to lose. We must all push for an end to the bloodshed before Syria plunges into the abyss,” he said in a statement issued in Hatay.

The UN High Commissioner for Refugees (UNHCR) said today it is sending a team to provide technical assistance to nine camps on the border between Turkey and Syria, which have so far been run by Turkish authorities.

UNHCR spokesperson Adrian Edwards told a news briefing in Geneva that a plane with 1,600 tents and 1,400 blankets was sent to Turkey today, and stressed that the agency is working closely with the Turkish Red Crescent and Turkish authorities to ensure the supplies are distributed locally.

He added that the agency has received reports concerning attacks in refugee camps in Turkey, but stated that details are still unclear and it will continue to monitor the situation closely. 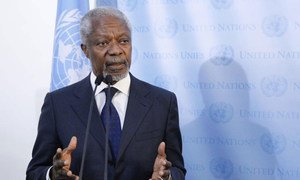 The Joint Special Envoy of the United Nations and the League of Arab States, Kofi Annan today stressed the escalation of violence in Syria is “unacceptable”, and called on the Government to withdraw troops and cease all hostilities.