The United Nations human rights chief today urged Barbados to adopt more effective legislation measures to combat discrimination and domestic and sexual violence in the country, adding that an attitudinal change is needed in society as a whole to tackle these issues.

“Domestic violence against women and children, and sexual harassment, occur all over the world. However, reports suggest that they are particularly serious problems here in Barbados and in other Caribbean countries, and rape is shockingly commonplace,” said the UN High Commissioner for Human Rights, Navi Pillay, in a statement at the end of her visit to the country.

During her three-day visit, Ms. Pillay held meetings with Prime Minister Freundel Stuart, members of the cabinet, and other senior officials, as well as with the leader of the opposition and senior judicial figures. She also met members of civil society organizations, who told her of the challenges faced by the country in implementing its international human rights obligations and reflecting them into laws and practices.

From her meetings with officials, Ms. Pillay said she identified several challenges that Barbados still faces in relation to human rights, including issues related to discrimination, stigmatization and marginalization, as well as a lack of adequate sanctions for sexual harassment and the psychological and physical impact which domestic violence has on children.

The human rights chief emphasized that it is the responsibility of the Government to show leadership on issues relating to all forms of discrimination, including those based on race, gender, sexual orientation or identity.

“The authorities need to adopt more effective legislative measures to combat these very destructive forms of behaviour and crimes, and to undertake public awareness programs to tackle the underlying discriminatory attitudes that permit them to continue,” Ms. Pillay said.

She welcomed progress in some areas, such as the Government’s commitment to abolish the current mandatory death sentencing, and urged the country to move towards a moratorium and eventual abolition of this policy. “The fact that there has not been an execution in almost thirty years is clear evidence of the readiness of society to move in this direction,” she said.

Ms. Pillay, who is the first UN human rights chief to visit an English-speaking Caribbean country, reiterated the UN’s readiness to assist Barbados in implementing policies to further promote and protect human rights.

“I urge everyone in Barbados – the government, parliament, the ombudsman, the academic community, the NGOs, the media, and the general public – to work hard continuously and unremittingly in order to establish a stronger culture of human rights and respect for the dignity of every human being,” she added. 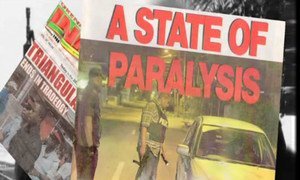 An increasing crime rate is threatening economies and livelihoods in Caribbean countries, states a new United Nations report that calls for the right mix of policies and programmes to tackle the problem.