The United Nations mission in Libya today expressed deep concern over the recent intensification of violence in three towns in the country's north-west and deplored reports of a growing number of casualties.

The UN Support Mission for Libya (UNSMIL) urged parties involved in the fighting around the towns of Zuwara, al-Jumail and Regdalin to immediately cease hostilities while talks continue, and welcomed efforts by authorities and local leaders to broker a ceasefire and restore calm.

“The Libyan people sacrificed their lives to secure their freedom for a new, democratic Libya for all its citizens,” said the Special Representative of the Secretary-General and head of UNSMIL, Ian Martin, in a press release. “I call on all parties to recall this sacrifice and resolve their differences without resort to the use of force.”

The latest clashes around Zuwara, coming on the heels of fighting in the south, underline the need for the authorities to accelerate efforts to build strong security institutions, including the integration of revolutionary fighters and the collection of heavy weapons from members of the public, the UNSMIL statement said.

The mission added that the clashes were a legacy of four decades of autocratic rule, stressing the need for all members of the Libyan society to recognize the need to work towards reconciliation.

Briefing the Security Council in January, Mr. Martin said security remains a major concern in Libya. Clashes in different parts of the country highlighted the risks associated with the abundance of weapons and the diverse armed “brigades” operating with unclear lines of command and control. 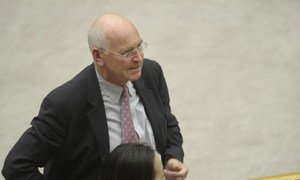 The United Nations mission in Libya has welcomed the ceasefire brokered in the south-western city of Sabha, where fighting in recent days has resulted in some 50 deaths, and called on all sides to address the underlying causes of the violence.