The United Nations refugee agency today voiced deep concern about the deteriorating political and security situation in Mali, where thousands of people continue to flee their homes due to fighting between Government forces and Tuareg rebels in the country’s north.

“The north of the country is becoming more and more dangerous due to the proliferation of armed groups in the region,” a spokesperson for the office of the UN High Commissioner for Refugees (UNHCR), Melissa Fleming, told reporters in Geneva.

Renewed fighting in northern Mali has uprooted more than 200,000 people since January, with the majority seeking safety in neighbouring countries and some 93,000 believed to be internally displaced. The country is also dealing with a coup by rebel Malian soldiers who took control of the country some 10 days ago and announced the dissolution of the Government led by President Amadou Toumani Toure.

Ms. Fleming reported that more than 2,000 people have fled to Burkina Faso and Mauritania over the past five days because of the insecurity and the political instability stemming from the military coup. The majority of the refugees are Tuaregs, but there are also ethnic Peuls, Arabs and Bambara.

Refugees pouring into neighbouring countries are reporting the presence of armed militiamen and home guards units set up by local communities to defend themselves, she said.

“Most tell UNHCR staff that they fled because they were worried about armed robbers and feared there would be more heavy fighting in the north, while some said they left their homes due to lack of food,” said Ms. Fleming. “Others told our teams that they decided to leave Mali when hopes for a negotiated peace between the Government and Tuareg rebels in the north faded after the coup.”

The number of Malians crossing into Niger appears to have dropped recently, with UNHCR hearing of only one group of 300 people crossing last week and seeking shelter in the village of Ayrou.

The agency is stepping up its assistance to Malian refugees across the Sahel region who face acute water and food shortages. The influx of large numbers of mostly nomadic refugees and their cattle is straining the limited resources in many arrival areas, and the situation has worsened since Tuareg fighters captured several big towns in the north last week, preventing UNHCR and other aid agencies from reaching those in need of assistance.

“UNHCR is calling on all parties to refrain from any action that could put fleeing populations in danger or hamper their movement to safer areas,” said Ms. Fleming.

Meanwhile, the Permanent Representative of the United States to the UN and President of the Security Council for the month of April, Ambassador Susan E. Rice, told reporters at a briefing in New York today that Security Council members were united in their demand that the junta leaders who have seized control of the country immediately step down and restore constitutional order.

Ms. Rice said that the Under-Secretary-General for Political Affairs, B. Lynn Pascoe, briefed the Council on Tuesday morning, stressing that the situation in the country “had taken a turn for the worse over the course of the past several days.” He warned that towns in the north have fallen to the rebels, with Government forces “effectively abandoning their positions in the north without much of a fight.” 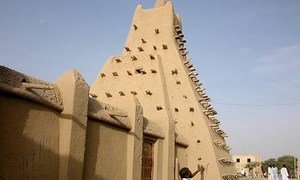 The head of the United Nations Educational, Scientific and Cultural Organization (UNESCO) today voiced concern about the risks posed by the latest fighting in Mali to the World Heritage site of Timbuktu and called on the parties to safeguard the country’s cultural heritage.