Secretary-General Ban Ki-moon today called for increased resources to help strengthen and harmonize the treaty bodies that monitor the implementation of international human rights treaties, describing them as the indispensable link between universal standards and the individuals they are designed to protect.

The treaty bodies are created in accordance with the provisions of the respective human rights treaty they monitor, and the Geneva-based Office of the United Nations High Commissioner for Human Rights (OHCHR) supports their work and assists them in harmonizing their working methods and reporting requirements through their secretariats.

“It is important that this process will complement the Geneva-based efforts by financially supporting the expansion of the treaty body system and, at the same time, preserving its independence,” Mr. Ban said in his remarks.

In his remarks to the meeting, the President of the General Assembly, Nassir Abdulaziz Al-Nasser, said his main objective will be to build unity for the treaty body strengthening process.

“This process will also work to improve the impact of the human rights treaty bodies on rights-holders and duty-bearers at the national level, by strengthening their work, while fully respecting their independence,” he said, adding that “all stakeholders should be bound by the shared interest of making the best decisions for the treaty body system itself.” 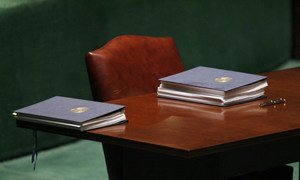