ECCC
Extraordinary Chambers in the Courts of Cambodia.

30 March 2012
Secretary-General Ban Ki-moon has decided to initiate a selection process for new international judges for the United Nations-backed Cambodia genocide tribunal, and stressed that the Government must provide full cooperation so they can carry out their duties.

Judge Blunk cited attempted interference by Government officials in the court’s proceedings, while Judge Kasper-Ansermet stated that he was being prevented from properly and freely carrying out his duties at the tribunal, which was set up as an independent court using a mixture of Cambodian and foreign personnel.

“The circumstances that have given rise to these two resignations remain worrying,” said a statement issued by Mr. Ban’s spokesperson.

Both judges were working on cases 003 and 004, which involve former senior members of the Khmer Rouge military suspected of being responsible for the deaths of thousands of people.

“The Secretary-General believes that it is essential that the judicial process in relation to cases 003 and 004 be brought back onto a positive course,” said the statement.

At the same time, their selection by the Secretary-General will not by itself fully address the concerns that have arisen in regard to the judicial process in these cases, the statement noted.

“It is essential that the Royal Government of Cambodia extend full cooperation to the new judges once it has been informed by the Secretary-General of their selection,” it stated, adding that the new judges should be promptly appointed by the Cambodian authorities.

The new international co-investigation judge, the statement added, should be afforded “every assistance and full cooperation” to carry out his or her functions.

“The Secretary-General encourages the Royal Government of Cambodia and the international community to view the selection of the new judges as an opportunity to move forward beyond recent events, and enable the ECCC to carry out its obligations in full by considering all of the cases before it in accordance with international standards of fairness” the statement added.

Mr. Ban also encouraged all partners to provide financial contributions to enable the court, which faces a serious funding challenge, to concentrate on the critical judicial work at hand.

The ECCC is designated to try those deemed most responsible for crimes and serious violations of Cambodian and international law between 17 April 1975 and 6 January 1979 during the Khmer Rouge regime. 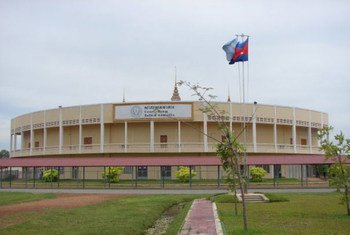 19 March 2012
The United Nations voiced concern today as a second judge resigned from the Cambodia genocide tribunal after stating that he is being prevented from “properly and freely” carrying out his duties.