A “durable solution” has yet to be found to the displacement of communities affected by nuclear testing more than sixty years ago in the Marshall Islands, a United Nations independent expert warned today.

“I have listened to the concerns and stories of affected communities from Bikini, Enewetak, Rongelap and Utrik. As a result of the nuclear testing, all of these communities have suffered dislocation, in one form or another, from their indigenous way of life,” said the Special Rapporteur on the human rights obligations related to environmentally sound management and disposal of hazardous substances and waste, Calin Georgescu.

From 1946 to 158, some 67 nuclear weapons tests were carried out in the Marshall Islands, which were then administered by the United States under trusteeship arrangements with the UN.

Independent experts, or special rapporteurs, are appointed by the Human Rights Council to examine and report back on a country situation or a specific human rights theme. The positions are honorary and the experts are not United Nations staff, nor are they paid for their work.

Mr. Georgescu, who just finished the first fact-finding mission to the Marshall Islands by special rapporteur, said many communities “feel like ‘nomads’ in their own country and many have suffered long-term health effects.”

The expert underlined the need for strategic and long-term measures to tackle the consequences of the nuclear testing programme to ensure sustainable progress and cope with the specific challenges posed by climate change in the country. He urged the Government of the Marshall Islands, the United States and the international community to find effective ways to redress the situation for those affected.

“The affected communities are searching for solutions, but are yet to feel that they have been restored to a position that is any way equivalent to the life they and their families lived before this dislocation,” Mr. Georgescu said. “Each of the communities from these four affected atolls has a unique history in relation to the nuclear testing and each needs its own solutions.”

Mr. Georgescu stressed that education will be key for the long-term survival of the country, as there will be an increasing need to sustainably preserve the cultural and environmental heritage of the country, including the Bikini Atoll which has been declared a World Heritage site by the UN Educational, Scientific and Cultural Organization (UNESCO).

Mr. Georgescu is due to present his final report to the Human Rights Council in September. 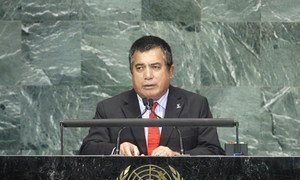 The United Nations has failed to accept the consequences of the decisions it took on nuclear testing in the 1950s, and the people of the Marshall Islands are still paying the penalty physically and psychologically, the country’s Foreign Minister said today.