UNHCR/S. Malkawi
A young Syrian refugee with his brother in Jordan. The boys fled Syria with their parents.
29 March 2012

Those in need include people directly affected by the ongoing violence, such as the injured and internally displaced persons, and those of have lost access to essential services and host families, the UN Office for the Coordination of Humanitarian Affairs (OCHA) said in a summary of the assessment.

Technical staff from eight UN agencies participated in the assessment, which concluded on Monday, as well as three staff from the OIC. The team visited Aleppo, Ar Roqqa, Dara’a, Dayr Az Zor, Hama, Homs, Idlib, Lattakia, Rural Damascus and Tartous governorates. The analysis has already been shared with the Syrian Government.

Information was gathered from civilians, government officials, religious and community leaders, the Syrian Arab Red Crescent (SARC), and local non-governmental organizations. While some areas could not be accessed due to ongoing insecurity or time constraints, the mission’s members were able to visit opposition-held neighbourhoods, according to OCHA.

Priority needs identified in the assessment include protection, food, medical assistance, non-food items, such as beddings and household essentials, and education.

Syria’s Deputy Minister of Foreign Affairs has approved the delivery of assistance in coordination with the SARC. An initial convoy carrying food, blankets and hygiene kits for 2,000 displaced families left Damascus for the Tartous Governorate yesterday. Delivery is expected to begin tomorrow and further distributions are planned in other locations.

OCHA said that humanitarian efforts must remain completely separate from any political agenda and that UN agencies will continue to ensure the neutrality, independence and impartiality of their humanitarian work. The assessment report also encouraged donors to contribute to the newly established Emergency Response Fund for Syria.

Meanwhile, the Director-General of UN Educational, Scientific and Cultural Organization (UNESCO), Irina Bokova, called for the protection of Syria’s cultural legacy, citing media reports that have indicated possible damage to precious sites during the ongoing conflict.

“I wish to express my grave concern about possible damage to precious sites and to call upon all those involved in the conflict to ensure the protection of the outstanding cultural legacy that Syria hosts on its soil,” said Ms. Bokova. “Damage to the heritage of the country is damage to the soul of its people and its identity.”

A succession of cultures in what is now Syria left an outstanding wealth of archaeological sites, historic cities, cultural landscapes, monuments and works of art that bear witness to the evolution of human ingenuity, according to UNESCO.

Six Syrian sites – Damascus, Aleppo, Palmyra, Bosra, the Crac des Chevaliers and Saladin’s Castle, the Ancient Villages of Northern Syria – are inscribed on UNESCO’s World Heritage List. Many others are inscribed on the country’s Tentative List, such as Apamea – where a number of journalists have reported that the Citadel of Madiq has been bombarded. The so-called

Tentative List is an inventory of those properties which a country intends to consider for nomination to the World Heritage List.

Earlier this year, UNESCO reminded the Syrian authorities, through the country’s representative to the agency, of their responsibility to ensure the protection of cultural heritage.

“This situation is becoming more crucial by the hour,” said Ms. Bokova. “I urge the Syrian authorities to respect the international Conventions they have signed, in particular the 1954 Convention for the Protection of Cultural Properties in the Event of Armed Conflict, the Convention on the Means of Prohibiting and Preventing the Illicit Import, Export and Transfer of Ownership of Cultural Property, and the World Heritage Convention.”

The UNESCO chief has contacted the World Customs Organization, the international police organization INTERPOL, and the specialized heritage police of France and Italy to alert them to objects from Syria that could appear on the international antiquities market.

“UNESCO stands ready to assist in assessing reports of damage to the cultural heritage of Syria, including the World Heritage sites, and in preparing plans for their safeguarding, as soon as this becomes possible,” she added. 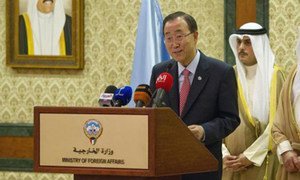 Secretary-General Ban Ki-moon today called on Syrian President Bashar Al-Assad to implement a six-point plan put forward recently to find a peaceful solution to the crisis in the country.