“It was overall a constructive meeting,” said the head of mission and Force Commander of the UN Interim Force in Lebanon (UNIFIL), Major-General Paolo Serra, following a regular tripartite meeting with officials from the Lebanese Armed Forces (LAF) and the Israel Defence Forces (IDF), at a UN position located near the Ras Al Naqoura crossing between the two countries.

“Both parties expressed their full support and commitment to work together with UNIFIL for the implementation of the relevant provisions of resolution 1701 and to maintain calm in the area,” said Maj-Gen Serra in a press release.

In 2006, the Security Council adopted resolution 1701, ending the so-called summer war between Israel and the Lebanon-based group Hizbollah. It has largely been respected over the past five years. Secretary-General Ban Ki-moon recently said the resolution has brought an “unprecedented” degree of relative calm and stability to southern Lebanon.

Issues covered in Wednesday’s tripartite meeting included the situation along the Line of Withdrawal, also known as the “Blue Line;” the ongoing visible marking of the Blue Line; violations and other incidents; and, the withdrawal of Israeli forces from northern half of the town of Ghajar.

The meeting also covered “very important issues” on maritime security, the UNIFIL Force Commander said, adding that he had encouraged the Lebanese and Israeli officials to work together on the issues to reduce the risk on incidents that could escalate the situation.

“To this end, we intend to continue discussions with the parties in the coming days both at the bilateral and tripartite levels,” said Maj-Gen Serra.

Continuing from the special tripartite meeting that took place on 23 February, follow-up discussions were also held on the planned construction of a wall to replace the existing Israeli technical fence along the Blue Line, near the town of Kafr Kila, as an additional security measure.

Security Council calls for efforts to ensure stability in Lebanon 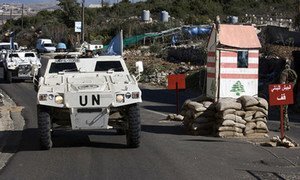 The United Nations peacekeeping force in Lebanon (UNIFIL) is investigating last night’s firing of a rocket that has damaged a home and seriously injured a woman in the country’s south.