As part of a United Nations initiative to fight hunger, football stars from 300 European professional clubs will this weekend take to the field to help raise awareness of the need for urgent action to avert a humanitarian disaster in the Sahel region of Africa.

Starting on Saturday, European professional clubs will play a series of matches over four days in various cities, from Glasgow in Scotland to Novosibirsk in Russia, to raise awareness among football enthusiasts about the rapidly deteriorating humanitarian crisis in the Sahel.

“We need public support for food crises like this one. No one knows like footballers how crucial it is to have the stadium on your side to win the match,” said a UN Goodwill Ambassador for the Food and Agriculture Organization (FAO), Spanish football player Raúl González Blanco.

Due to poor rainfall and failed harvests, the Sahel region is currently in the grip of a food crisis. Some 15 million people are estimated to be at risk of food insecurity, compounded by chronic poverty, high food prices and conflict, and are in urgent need of live-saving cash, food and agricultural training to protect their livelihoods.

The matches, which kick-off on Friday, are part of the Match Against Hunger campaign, launched in 2008 by the Association of European Professional Football Leagues in collaboration with FAO and the European Commission. Participants in the campaign include Brazilian player Roberto Carlos and former Italian national team goalkeeper Francesco Toldo.

“The people of the Sahel may think the world has forgotten them,” said Mr. Toldo. “This weekend, European football will stand in solidarity with them. They will know that they are not alone.”

“We have a responsibility to those who are in distress through no fault of their own,” said former French international player Patrick Vieira, who was born in Senegal, one of the affected countries. “The right to food is a basic human right, and no one in today’s world should go hungry.”

“We must act now to help people help themselves,” said FAO’s Director-General, José Graziano da Silva. “At the same time, we need to build resilience in local communities to stop jumping from crisis to crisis, and to prevent droughts from leading inevitably to famine.”

Many football players have been helping to fight hunger through their work as goodwill ambassadors. Former footballer Hristo Stoitchkov, who was known as “El Pistolero” (the gunslinger) visited Burkina Faso last year to see the joint work of the European Commission and FAO up close.

“I have witnessed their life-saving, life-changing work first hand. They help people to feed themselves today and prepare for tomorrow. It’s the right kind of help getting to the right people,” Mr. Stoitchkov said.

Felix Magath, a former footballer and active coach in the German Bundesliga, the professional football league stated, “We will ask our fans to join with us in calling for urgent help to the Sahel. United in this one cause we can truly make a difference". 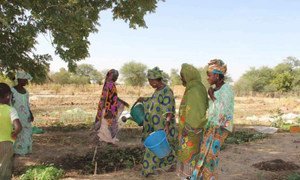 The United Nations food agency today called for $69.8 million in additional funding to prevent a full-blown food and nutrition crisis from unfolding in Africa’s Sahel region.