“We are in a race against time and some of the harshest climatic conditions on the planet,” said the Director of Operations at the UN Office for the Coordination of Humanitarian Affairs (OCHA), John Ging, after returning from a week-long mission to Niger, Burkina Faso and Mauritania.

“This is already an appalling crisis in terms of the scale and degree of human suffering and it will get worse unless the response plans are properly funded,” he added. “It’s a matter of life or death for millions who are on the brink.”

More than 15 million people in the Sahel are directly affected by worsening food shortages and malnutrition brought on by the ongoing drought, which has been compounded by conflict and insecurity. Earlier this week, the Security Council expressed serious concern over the rapidly deteriorating humanitarian crisis there, saying that the presence of armed and terrorist groups, as well as the proliferation of weapons in the area, has exacerbated the problem.

An estimated 100,000 refugees fleeing conflict in Mali have sought shelter in neighbouring countries, and tens of thousands of migrant workers have returned from Libya and Côte d’Ivoire, meaning that they can no longer send remittances to their families. A crucial coping mechanism has therefore collapsed for poor communities who depended on the remittances, according to OCHA.

Mr. Ging underlined the urgent need to accelerate the pace of the response to the crisis. “More than 200,000 children died of malnutrition last year and over one million are threatened with severe acute malnutrition right now,” he said.

At a meeting with representatives from donor countries in Nouakchott, the capital of Mauritania, the humanitarian official encouraged their continued generosity, highlighting the clearly visible and positive lifesaving impact of their funding so far.

However, response plans across the region are less than 40 per cent funded and the crisis is expected to peak in the coming months.

According to OCHA, close coordination between aid agencies and national governments in the development of response plans in the region is building on international best practice tailored to the specifics of each locality.

“We must focus on both the immediate and longer-term issues simultaneously, as building resilience and sustainable livelihoods capable of coping with the new climatic reality across the Sahel is key to saving lives,” Mr. Ging said. 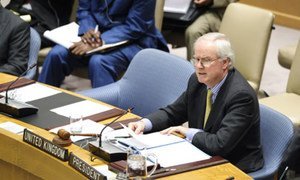 The Security Council today voiced serious concern over the rapidly deteriorating humanitarian crisis in Africa’s Sahel region, saying that the presence of armed and terrorist groups, as well as the proliferation of weapons in the area, have exacerbated the problem.