The situation between the Palestinians and Israel remains “uncertain and difficult,” a United Nations envoy told the Security Council today, while warning of the increased risks of an absence of political progress and violence on the ground.

“The unfortunate reality is that the parties have not yet found sufficient common ground to resume direct negotiations, and prospects remain slim,” the Special Coordinator for the Middle East Peace Process, Robert Serry, said in a briefing to the 15-member body.

Direct talks between Israel and the Palestinians stalled in September 2010 after Israel refused to extend its freeze on settlement activity in the occupied Palestinian territory. That decision prompted the Palestinian Authority’s President Mahmoud Abbas to withdraw from direct talks with Israel’s Prime Minister Benjamin Netanyahu, which had only resumed a few weeks earlier after a two-year hiatus.

Israeli and Palestinian negotiators began preparatory talks at the start of January in Amman under the facilitation of King Abdullah II of Jordan and that country’s Foreign Minister, Nasser Judeh, with a view to a resumption of direct talks between the parties.

The envoy said the events of the past month demonstrate a “dangerous combination” of no political progress, instability and violence on the ground, especially in Gaza, and an increasingly precarious situation for the Palestinian Authority.

In the absence of progress, he added, there have been a number of “potentially worrying” developments in the West Bank and Gaza, including an increase in the number of Palestinians injured during search operations in the West Bank by the Israeli Defense Forces and a doubling of demonstrations and riots in the area, as well as continued Israeli settlement activity.

In his remarks, Mr. Serry also emphasized the increased risks of a continued political vacuum.

“It will become increasingly difficult to sustain the achievements of Palestinian state-building without a political horizon,” he said. “And the absence of progress can easily be filled by negative trends that make each day more uncertain.”

He noted that it is this uncertain situation that the Quartet – the diplomatic grouping comprising the UN, European Union, Russia and the United States – will have to address at its meeting in Washington D.C. on 11 April.

“It is imperative that the Quartet assumes its responsibilities in directing collective efforts toward overcoming gaps in trust and substance so that we don’t lose sight of the ultimate and agreed goal of a two-State solution,” the envoy said.

The UN and its partners have been consistently calling on Israeli and Palestinian authorities to remain engaged in negotiations and refrain from provocative actions.

Secretary-General Ban Ki-moon discussed the issue today with Jordan’s King Abdullah, on the margins of a nuclear security summit the two men attended in Seoul, in the Republic of Korea. Mr. Ban voiced full support for Jordan’s efforts to promote Israeli-Palestinian dialogue, according to the Secretary-General’s spokesperson. 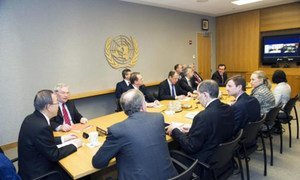 The United Nations and its diplomatic partners in the search for peace in the Middle East today called on Israeli and Palestinian authorities to remain engaged in negotiations and refrain from provocative actions.