27 March 2012
The Security Council voiced deep alarm today over military clashes on the border area between Sudan and South Sudan, saying the confrontation threatens to reignite conflict between the two countries, worsen the humanitarian situation there and lead to civilian casualties.

Members of the Council called on the governments of Sudan and South Sudan to exercise maximum restraint and sustain dialogue to peacefully address the issues that have fuelled mistrust between them, including differences over oil, violence in the border region, citizenship and the dispute over the Abyei area.

“The members of the Security Council call upon Sudan and South Sudan to respect the letter and spirit of their February 10 Memorandum of Understanding on Non-Aggression and Cooperation. They urge both countries to utilize the upcoming session of the Joint Political and Security Mechanism to defuse tensions along the border and take appropriate steps to operationalize the Joint Border Verification and Monitoring Mechanism,” said the press statement read by Ambassador Mark Lyall Grant of United Kingdom, which holds the Council’s presidency this month.

The 15-member United Nations body also recalled the statement issued by the President of the Council on March 6 reiterating members’ grave concern about reports of repeated incidents of cross-border violence, including troop movements, support to proxy forces and aerial bombardments.

Members of the Council demanded that all parties cease military operations in the border areas and put an end to the cycle of violence. They also demanded that both governments take no action that would undermine the security and stability of the other, including through any direct or indirect form of support to armed groups in the other’s territory.

The Council reiterated the grave urgency of delivering humanitarian aid, in accordance with international law, including applicable international humanitarian law, and guiding principles of emergency humanitarian assistance, to avert a worsening of the serious crisis in the Sudanese states of Southern Kordofan and Blue Nile.

It urged both countries to continue working within the context of the negotiations carried out under the auspices of the African Union High-level Implementation Panel (AUHIP), and encouraged continued partnership with the UN and other key international stakeholders.

Earlier, the Office of the UN High Commissioner for Refugees (UNHCR) also voiced concern over recurring fighting near the Yida refugee settlement in South Sudan, close to the border with Sudan, saying the clashes are putting residents of the camp at risk.

“Our concerns are heightened by clashes reported yesterday between the national armies of Sudan and South Sudan in Lake Jau and other border areas,” said Melissa Fleming, UNHCR spokesperson in Geneva.

UNHCR and its partners are providing basic assistance to more than 16,000 refugees who settled in Yida after fleeing violence in the Nuba Mountains region, located in Sudan’s Southern Kordofan state.

The agency is in regular discussions with refugee leaders in Yida about “the urgent need to relocate in order to avoid civilian casualties among a population that has already endured a great deal of trauma,” Ms. Fleming said.

In February, the refugee agency carried out a full registration of the settlement’s inhabitants, as well as a nutrition survey and a comprehensive measles vaccination campaign for children. The UN World Food Programme (WFP) has distributed food rations.

“UNHCR considers that Yida refugee settlement is not safe for long-term stay due to its proximity to the volatile border zone,” Ms. Fleming said, adding that South Sudan’s national and local authorities have also called for the refugees to move away from the border. However, the refugees’ leaders have said that they would rather stay in Yida because of its proximity to their homes in the Nuba Mountains.

“We cannot ignore the fact that Yida is near a heavily militarized zone with recurrent fighting and bombing,” said Ms. Fleming. “Yida itself came under aerial attack in November last year, causing refugees to flee into the bush. In December, artillery shells fell close to the camp.”

Some 2,300 refugees have so far moved southwards to safer sites in Nyeel and Pariang, where UNHCR is providing them with food, water, shelter, sanitation and health care. Refugee leaders also agreed to the relocation of children, recognizing their need for safety and formal education.

About 1,500 secondary school students have registered to attend school in Pariang. Some 450 local and refugee children are attending primary school together in Nyeel, where the authorities have provided land for cultivation. Seeds and tools have been distributed to refugee families for farming.

Meanwhile, in South Sudan’s Upper Nile state, where an influx of refugees from Sudan’s Blue Nile state is continuing, relocation from border zones has been ongoing. About 86,000 Sudanese refugees fleeing attacks in Blue Nile state have relocated to the safety of formal sites in Doro and Jammam, Ms. Fleming said.

In total, more than 105,000 Sudanese refugees from the states of Southern Kordofan and Blue Nile have sought refuge South Sudan. Another 30,000 refugees fled Blue Nile into Ethiopia.

South Sudan currently hosts the peacekeeping operation known as the UN Mission in South Sudan (UNMISS), which is helping to consolidate peace and security and establish conditions for development there following the country’s independence from Sudan in July 2011. 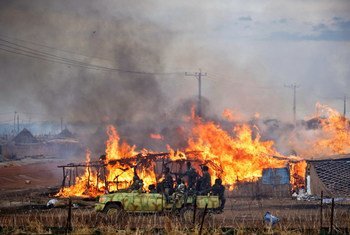 26 March 2012
Secretary-General Ban Ki-moon is deeply concerned about the military clashes in the border region of Sudan and South Sudan, and calls on their Governments to fully respect and implement the agreements they have already reached on security, border monitoring and the disputed area of Abyei, Mr. Ban’s spokesperson said today.