A comprehensive approach through laws, education and international cooperation is needed to end modern-day slavery, the President of the General Assembly, Nassir Abdulaziz Al-Nasser, said today.

“The terrible impacts of slavery and the slave trade are still felt to this day,” Mr. Al-Nasser said in remarks delivered on his behalf to a General Assembly meeting to commemorate the International Day of Remembrance of the Victims of Slavery and the Transatlantic Slave Trade. “They have devastated continents and countries. They have led to profound social and economic inequalities, and have given rise to hatred, racism and prejudice.”

In 2007, the General Assembly designated 25 March as the International Day of Remembrance of the Victims of Slavery and the Transatlantic Slave Trade to honour the 28 million estimated Africans who were violently removed and cast into slavery, mainly in colonies in North America, South America and the West Indies.

In his remarks, Mr. Al-Nasser emphasized that Member States must work tirelessly to eradicate modern slave-like practices that have emerged in the forms of racism, human trafficking, sexual exploitation, child labour, forced marriage, and the forced recruitment of children for use in armed conflict.

The General Assembly President also underlined that existing international instruments on slavery “should be fully utilized to bring about necessary change in attitudes and customs, to punish the offenders, and to support innocent victims in re-gaining their lives and dignity.”

“Let us learn from the horrors and sacrifices of the past, and ensure through concrete actions and results that slavery in all its forms is forever eliminated,” the General Assembly was told.

Since Friday, the UN has been hosting a series of events to pay tribute to the men and women who bravely fought against the transatlantic trade as well as those who continue to stand up against modern forms of slavery.

This year’s commemoration at UN Headquarters includes an exhibition of images of heroes and activists, original documents, historical illustrated newspapers and artefacts, as well as an evening of cultural and culinary specialties of Africa and a global student videoconference.

In addition, plans are underway to erect a permanent memorial in the UN Headquarters complex to remind the world that millions of Africans were violently removed from their homelands, abused and robbed of their dignity over the course of four centuries during the transatlantic slave trade. 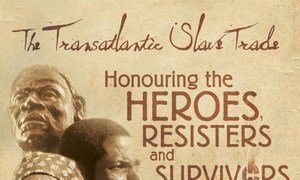