26 March 2012
With the deadline for achieving the Millennium Development Goals (MDGs) just three years away, a senior United Nations official today emphasized that spending on agriculture is the most effective type of investment for halting poverty in Africa.

“Increasing investment in agriculture is essential to achieving the MDGs,” said the President of the International Fund for Agricultural Development (IFAD), Kanayo F. Nwanze. “Investments in agriculture are more effective in lifting people out of poverty than investments in any other sector – they not only drive economic growth and set the stage for long-term sustainable development, they pay high dividends in terms of quality of life and dignity for poor rural people.”

Mr. Nwanze’s comments came on the eve of his departure to Addis Ababa, Ethiopia, where he will join African ministers at high-level meetings to plan concrete actions to push growth in the continent, by ensuring that agriculture is at the top of national agendas.

“The experience of IFAD has shown that agriculture is a business, and our business is to make sure smallholder agriculture is profitable so that rural communities can thrive,” Mr. Nwanze said in a news release, adding that “to accelerate progress in meeting the MDGs, agriculture must be viewed as the main engine of economic growth.”

IFAD specializes in helping eradicate rural poverty in developing countries. The eight MDGs – which range from halving extreme poverty to providing universal primary education, all by the target date of 2015 – form a blueprint agreed to by all the world’s countries and all of the world’s leading development institutions.

The events in Addis Ababa – the Joint Annual Meeting of the African Union Conference of Ministers of Economy and Finance and the UN Economic Commission for Africa Conference of African Ministers of Finance, Planning and Economic Development – will focus on how to plan post-2015.

According to IFAD, a key challenge is helping build the capacity of smallholder farmers and their organizations so that they can become viable rural businesses, particularly for women and young people who shoulder the future of African smallholder farming.

At the meetings in the Ethiopian capital, the IFAD President will share his vision for ensuring smallholder farmers are at the centre of any plan for post-2015. Such farmers represent 80 per cent of all farms in sub-Saharan Africa and contribute up to 90 per cent of production in some countries.

Mr. Nwanze also expects to speak about the impact of climate change on sub-Saharan Africa, noting how African smallholder farmers are particularly affected by the global phenomenon as they do not have the means and know-how to adapt to its consequences.

With presidential poll now over, Ban urges Senegalese leaders to work together 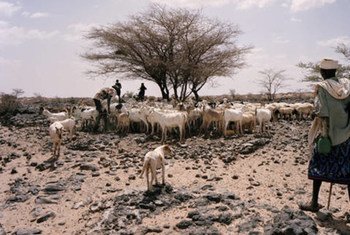 23 March 2012
The United Nations food agency today urgently appealed for $50 million within the next 90 days to help farmers in the Horn of Africa with priority agricultural and pastoral activities, ahead of the region’s upcoming planting season.