26 March 2012
With land degradation and desertification affecting 1.5 billion people across the globe, 75 per cent of them among the world’s poorest, the United Nations’ most recently-appointed Drylands Ambassador today called for greater efforts to combat the problem.

“I want us all to agree that we will become a society that is free of land degradation,” said Leila Lopes, also the holder of the Miss Universe 2011 title, at a press conference at UN Headquarters. “I want us to agree on a goal that will help us to reduce land degradation, rehabilitate more land than is being degraded. I truly believe that we can come together and create awareness about this important environmental issue.”

Earlier this year, the United Nations Convention to Combat Desertification (UNCCD) appointed Ms. Lopes as one of its Drylands Ambassadors, charged with helping raise international awareness about desertification, land degradation and drought, causes and possible solutions. Miss Lopes comes from the African region where desertification is the foremost environmental challenge – part of her home country of Angola is threatened by desertification.

In her remarks to the press, Ms. Lopes stressed that “drylands are not wastelands,” noting that they can be restored, and pledged to work hard to create awareness on the threat of land degradation. She added that she will travel to Brazil in June to participate in activities leading up to the UN Conference on Sustainable Development, also known as Rio+20.

“This is equal to 23 hectares of land transformed into man-made desert every minute,” Mr. Gnacadja said. “Sustainable land use for all and by all is an imperative. It should be the cornerstone for the green economy for sustainable development and poverty eradication, and I hope that the Rio+20 Conference in Brazil will live up to this imperative.”

He highlighted two mechanisms which he said can help halt the shrinkage of fertile land. The first of these entails the management of non-degraded fertile lands in ways that do not cause degradation, thus halting further loss; while the second method calls for the restoration of already degraded lands. 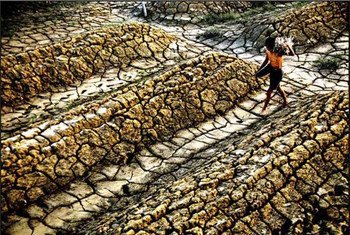 20 October 2011
United Nations agencies have agreed to step up their efforts to protect and revitalize drylands, and help improve the social and economic well-being of the communities that rely on these ecosystems.