25 March 2012
Secretary-General Ban Ki-moon today urged all nations to join forces to protect the thousands of United Nations personnel who risk their lives to help people in need around the world.

“True protection demands collective action,” Mr. Ban said in his message on the International Day of Solidarity with Detained and Missing Staff Members, observed on 25 March.

And yet, he noted, only 90 Member States have ratified the 1994 Convention on the Safety of UN and Associated Personnel, and only 27 have ratified the 2005 Optional Protocol which extends protection to UN personnel delivering humanitarian, political or development assistance.

UN Staff Union President Barbara Tavora-Jainchill, also noting these figures, said that international instruments to protect staff are in place, but too many Member States still have not made use of them. “It is their nationals that these instruments seek to protect,” she stated.

Mr. Ban drew attention to the fact that “scores” of UN staff and personnel were victims of detention, abduction, kidnapping, assault, harassment and even murder over the past year.

The UN Department of Safety and Security (DSS) has documented 189 cases where UN civilian personnel were detained or arrested by Member States in 2011. The problems continue this year. As of today, four staff are being held.

“On this International Day, I demand the immediate release of all detained staff members, and I call on all countries to join forces to protect the thousands of United Nations personnel who risk their safety to help suffering people in some of the most dangerous parts of our world,” said Mr. Ban.

He said that every attack on a UN staff member is a tragedy for the individuals involved, a serious crime that must be prosecuted and an attempt to undermine the Organization's global work for peace, human rights and development.

“We must respond with prevention, protection and justice,” he stated.

The International Day marks the anniversary of the abduction of Alec Collett, a former journalist and UN staff member who was working for the UN Relief and Works Agency for Palestine Refugees in the Near East (UNRWA) when he was abducted by armed gunmen in 1985.

With his remains having been found and returned to his family in 2009, the Day is also intended to honour his memory, and of all those who have suffered similar fates. 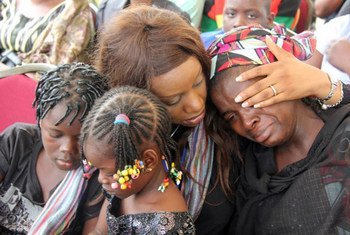 3 January 2012
United Nations staff members have become primary targets of attacks by terrorists and insurgents around the globe, the world body’s Staff Union warned today as it paid tribute to those colleagues killed while serving with the Organization in 2011.